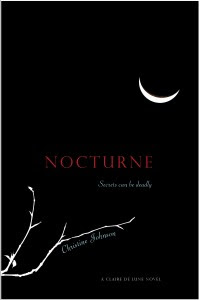 I met Christine Johnson on Twitter several months ago and was immediately impressed. She exudes kindness and class. Plus, she's a ton of fun! So, when I learned she had NOCTURNE, the follow up to last year's gorgeous CLAIRE DE LUNE, coming out, I couldn't wait to have her on the blog. Not only did she agree to be interviewed, she offered to give away a signed set of both CLAIRE and NOCTURNE. Yay! Here's a peek at both books:
CLAIRE DE LUNE:

Hanover Falls hasn’t had a werewolf problem in over one hundred years. Seattle, Copenhagen, Osaka–they’ve had plenty of attacks. But when humans begin dying in Claire Benoit’s town, the panic spreads faster than a rumor at a pep rally. At Claire’s sixteenth birthday party, the gruesome killings are all anyone can talk about. But the big news in Claire’s mind is the fact that Matthew Engle–high-school soccer god and son of a world-renowned lycanthropy expert–notices her. And flirts with her. A lot…

After the tragic events of the summer, Claire is looking forward to a new school year. All she wants to worry about is finding the most gorgeous dress to wear to the Autumn Ball with her perfect boyfriend. But as Claire know all too well, the life of a werewolf is never that simple, or that sweet…

I've always been a sucker for a good werewolf story! Naturally, being storyteller who loves shape-shifters, Christine chose to be interviewed by the Were-llama. Let's meet today's guests.

Now that you know who's who, it's time to reveal the beautiful cupcake my hubby made in honor of Christine's book. My hubby would like it noted that he is most grateful to Christine for having a simple tree branch design on her book cover, with nary a decomposing limb or intricate design in sight. He hopes other authors lined up for interviews on this blog are equally considerate but considering his wife's love of books with decomposing limbs and intricate designs on the cover, he doesn't hold out much hope. Without further ado, let's reveal the NOCTURNE cupcake and dive into the interview! 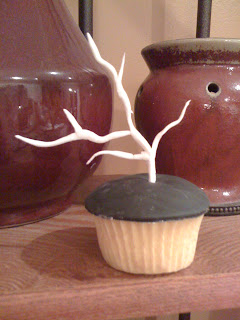 
Glowing red eyes, obviously. Though I find I get less screaming in public when I wear my regular, hazel-green contact lenses. *muah, hah, haaaaaaa* Seriously, though, writers are complete shape-shifters. It’s one of the things I love most about it. Before I was a writer, I was in the theater and it filled the same need for me - that desire to get right down into someone else’s head and see the world through their eyes. As a writer, I get to do that *all the time*, which makes me incredibly lucky. My job is to imagine how other people think and work and walk and talk. I get to be whoever I want while I stare at my computer. I love that.

2. I feel no need to be anyone else. Being ME is a full time job. I like to spit at my enemies from whichever end is closest to them. Do any of your characters have cool abilities like that?

Not so much with the spitting, no. But I do love things that are beyond the ordinary, which is one reason I love paranormal and sci-fi so much. In the CLAIRE DE LUNE novels, my Super Awesome All-Girl Werewolves do have the occasional extra-extra special ability, like Claire’s gift for hearing conversations that are taking place miles away. She can only do it in wolf form, but then I’m guessing you can only spit dangerously in Llama form?

3. Are you casting aspersions upon my spitting ability? *glares* Tread carefully, madam, lest you meet my business end and rue your very existence. If I had a nickname, it would be The Awesome. You?

The Klutzy. Possibly also The Random. Or maybe The Sarcastic. Which are all fairly lame as nicknames go, but are pretty accurate descriptors.

4. All nicknames except The Awesome are fairly lame, and that one is taken. I hang around this blog because I love stories. What’s your story about? Bonus points if it includes a llama.

No llamas. Sorry. NOCTURNE is the continuation of Claire Benoit’s story. Claire, part of an all-woman werewolf species, is struggling to find a way to fit her new, secret life as a shape shifter into her normal high school world without blowing either of her identities to smithereens. When the pack’s challenges prove to come with unimaginably dire consequences and her strained secrets threaten to burst her whole life at the seams, Claire has to find a way to stitch it all back together or lose everything she’s ever known - herself included.

5. It does sound fairly exciting, but you have to admit if you threw a llama into the mix, no one could resist your story. You’re making me a cake worthy of my awesome Were-llama status and decorating it to represent your story. What does it look like?

I can’t remember. I ate it too quickly. Cake doesn’t last that long around me. Okay, okay! Um, it would be a red velvet cake with white and black frosting, so that all the colors of my AWESOME new covers would be represented. And I think it would be a long, skinny, rectangular cake, with black shimmer-coated fondant. Across the top would be a very simple pattern of the phases of the moon, in white fondant, with the full moon smack in the middle of the cake and the waxing and waning phases stretching out to the left and right. Simple, but strong and elegant. Which is what I hope the books are.

6. YOU ATE MY CAKE??!? *prepares spit* I'll have you know the only thing saving you right now is C.J.'s hubby, who is unduly impressed that you know what fondant is. Any Were-llamas in your book?

There *were* Were-llamas. Then the werewolves ate them. Sorry.

7. Brace yourself. I'm told death by llama spit is most unpleasant. Anyone who might be a Were-llama and you just haven’t figured it out yet?

I have my suspicions about a particular sales clerk at the mall in Hanover Falls, but it’s hard to say.

Llamas. Better hair. (Fur? Hair? Crap. Now I have to Google this.)

9. Better EVERYTHING. I give you a baby Were-llama as a companion. What do you name her?

“Little Lily-Llama the Magnificent”. Or “Spitty”. It depends on my mood.

10. I'd go with the first one, unless you want the second to constantly be mistaken for a command. My favorite word is “awesome” because, yanno, look at me. What’s yours?

I love too many words to pick a favorite. A short list would include (but is not limited too, see me later for full legal disclaimer): Cerulean. Kerfuffle. Antediluvian. Effervescence. I can say, definitively, that my most hated word is “ointment”. I’ve never willingly said it. I don’t even like to type it. Excuse me, I have to go wash my hands now.

11. I find I sound suspiciously like a pig when I say "ointment" so I avoid it as well. As a young Were-llama, I dreamt of taking over the eastern seaboard one face full of spit at a time. What did you dream of doing when you were young?

As I mentioned earlier, I wanted to be an actress. I was quite serious about it - I even spent two years in a very competitive university conservatory program. Ultimately, it wasn’t for me. Or, more accurately, I wasn’t for it. I’m not cut out for a theater lifestyle. Writing suits me better, and, in the end, I love it more. I do occasionally miss treading the boards, and I still know the opening speech to Shakespeare’s Henry V by heart.

12. O for a Muse of Fire that would ascend the brightest heaven of invention ... or failing that, a gloriously awesome were-llama to take the stage. Cake or cookies?

GOOD CHRIST, WHAT KIND OF MONSTER ARE YOU?! *sigh* Fine. Cookies, but I’m staring longingly at the cake the whole time I eat.

13. Oh, no you don't. No cookies for you. No cake either. WHY??! Because earlier you ate my cake. *clears throat* You may call me Were-llama of Justice. Do you share chocolate?

I will share white chocolate with anyone. I will share milk chocolate if I like you. If I did not grow you in my womb, then DO NOT TOUCH MY DARK CHOCOLATE.

14. Does spitting on it count as touching? The Zombie Goat invasion is upon us. How will you fight them off?

Me, personally? Probably I’d run for the hills. If that wasn’t possible I guess I’d try to feed them old tin cans and hope for the best, but in reality I don’t think I’d last all that long in a hand-to-Zombie-Goat battle. Hey - thanks for having me over to chat. I really enjoyed it!

Thanks, Christine, for a thoroughly entertaining interview. And because the Were-llama ate the cookies AND the cake, I'll give you your gorgeous cupcake.

Of course, the fun isn't over yet! Christine is generously offering a signed set of books to one lucky commenter. The winner will receive a paperback CLAIRE and a hardback NOCTURNE. Don't forget to vote on the poll at the sidebar, and tune in next Wednesday when Christine posts her Top Five blog and gives away a one of a kind piece of jewelry designed just for Claire!

Contest is open to North America and ends at 8 p.m. Central Time Sunday, August 14th. Please fill out the form below to enter.