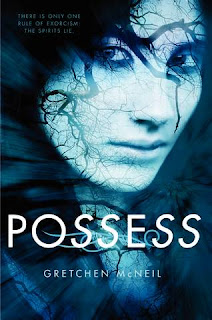 I met Gretchen McNeil after I signed with Harper Collins because she and I share an editor. (Shout out to the amazing, insightful, hilarious Kristin Daly Rens!) Kristin sent me a "Welcome to Balzer + Bray" box of books. Included in that box was an ARC of Gretchen's POSSESS. I read the synopsis for the book and immediately snatched it up to read! POSSESS is intense and atmospheric. It's set in San Francisco, and I appreciated how vivid and real it felt. Also, I don't mind telling you there is a scene in this book that disturbed me so much, I have no idea how I'll ever face going into a doll shop again. Here's a look at POSSESS:

See what I mean? When I asked Gretchen if she'd like to come on the blog, she immediately decided to take on the Spork of Doom. (I guess when you write about freaky demons and nasty conspiracies, a megalomaniac eating utensil doesn't seem quite so scary.) Let's meet today's guests.


Now that you know who's who, it's time to reveal the uber freaky cupcake my hubby made in honor of Gretchen's book. Usually, I ask my authors for a few different cupcake ideas and let my hubby choose the one he'd like to do. But in this case, there was only one option: a possessed doll. *cue recurring nightmare* My hubby was more than up to the task! Without further ado, I give you the possessed doll cupcake and Gretchen vs. the Spork of Doom.


Like you, I’m a multi-tasker. You can scoop up some yogurt AND stab a tater tot. I can load a shotgun AND shoot down a government helicopter with a grenade launcher. (Um…theoretically…) Win-win.

2. A grenade launcher might come in handy. *bestows Minion Status on you* Being a Spork of Doom takes moxie. What’s the sporkiest thing you’ve ever done?

I’d have to say the ballsiest (also, least practical) thing I’ve done is major in vocal performance in college. While it didn’t exactly get me on stage at the Metropolitan Opera, it did teach me a lot about telling a damn good story. Although it did give me the opportunity to sing with the circus, which is like the Met, only scarier.


Also, my mom wanted me to be a doctor so…that didn’t happen.

3. A circus performer who can handle a grenade launcher? *gives you the Spork Eye* Are you sure you aren't trying to unseat me from my rightful throne? When I’m not busy taking over the world, I like to eat pie. What kind of pie do you think is worthy of my Spork of Doom status?

I love pie. I really, really do. Favorite has got to be Grasshopper pie with an Oreo crust. What’s not to love? It’s minty. It’s chocolatey. It’s a shade of green you couldn’t find in nature.

4. I find your offering to be acceptable. What’s your favorite thing to do with a spork?

5. Just as long as you don't plan to use ME to launch your grenades. If you do, I will see your vocal performance degree and raise you three titanium tines of DOOM. I have the ability to be simultaneously spoon, fork, and weapon of mass destruction. What unique ability do you have?

Aside from my previously mentioned guerrilla warfare prowess, I’m simultaneously a writer of scary stuff, singer of scary opera, and clowner of scary…clowns.

6. Perhaps you can write a scary opera befitting my incredible rise to power. Just don't sing it while dressed as a clown. I hate having to spork my minions. In this day and age, a savvy spork bent on
world domination can’t afford to ignore a good marketing campaign. I’m thinking t-shirts with “Spork or Die.” If you made a shirt with your own slogan on it, what would it say?

“Gretchen McNeil: Girl Friday.” I think that sums up my multi-facetedness. It also reminds me of the movie His Girl Friday with Cary Grant and Rosalind Russell. Damn, I love that film.

7. If I had to compare myself to anyone in history, I’d have to say I’m most like Napoleon. Only skinnier. And shinier. And smart enough not to lose my empire at a place with a ridiculous name like Waterloo. Who are you most like and why?

8. Can you annihilate a pack of mutinous rebels with your wit? If not, I don't see the value. Why is your job just as much fun as world domination?

Two words: circus clowns. (Did I mention I sing in the circus? Yes? Just checking.)

9. In between conquests, I like to read a good story. What can you recommend and why?

Just finished WITCH EYES by Scott Tracey and just started WILDEFIRE by Karsten Knight. Highly recommend them both. Also, because I’m a nerd like this, my favorite book of all time is THE THIRTY-NINE STEPS by John Buchan. I love to recommend it.

10. I wonder if that's thirty-nine steps to total world domination? Because I can totally do it in thirty-eight. I'm just saying. You need to accomplish a secret, night-time mission as my minion. Cloak? No cloak? Why?

Could the cloak be form-fitting? No? Damn. Okay, no cloak then. I really need something that cinches at the waist, and besides, what kind of shoes does one WEAR with a cloak?

11. Combat boots! All the better to crush your opposition. My best piece of advice to others is this: “Fear the spork!” What’s your best advice?

I would have been so much happier if I’d learned that lesson at 18 instead of…yesterday.

Thank you, Gretchen, for such an entertaining interview! To find out more about Gretchen and her book, visit her (incredibly awesome) site. Of course, the fun isn't over yet! Gretchen is offering a signed copy of POSSESS to one lucky commenter. The giveaway is open to North America and is open until 8 p.m. Central Time Monday, September 12th. To enter, simply fill out the entry form. And don't forget to leave Gretchen a comment in the Blogger comments section!