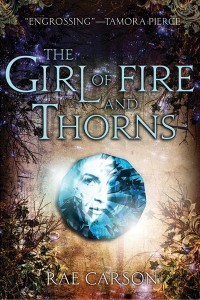 I met Rae last year when she signed with Holly. I have a soft spot in my heart for all of my agent-mates, but when I heard about Rae's book, I couldn't wait to get my hands on it--for reasons that had nothing to do with our agent and everything to do with how amazing GIRL OF FIRE AND THORNS really is. From the vivid, compelling world, to the captivating story of one girl's struggle to rise to the greatness everyone expects from her, this is a book you don't want to miss! Here's a peek:

Once a century, one person is chosen for greatness.

Elisa is the chosen one.


But she is also the younger of two princesses, the one who has never done anything remarkable. She can’t see how she ever will.


Now, on her sixteenth birthday, she has become the secret wife of a handsome and worldly king—a king whose country is in turmoil. A king who needs the chosen one, not a failure of a princess.


And he’s not the only one who seeks her. Savage enemies seething with dark magic are hunting her. A daring, determined revolutionary thinks she could be his people’s savior. And he looks at her in a way that no man has ever looked at her before. Soon it is not just her life, but her very heart that is at stake.


Elisa could be everything to those who need her most. If the prophecy is fulfilled. If she finds the power deep within herself. If she doesn’t die young.


Most of the chosen do.

GIRL OF FIRE AND THORNS is the first in a trilogy, and I can't wait to see how the story ends! Rae decided she wanted to take on the Were-llama (brave girl!). Let's meet today's guests.


Now that you know who's who, it's time to reveal the beautiful cupcake my hubby made in honor of GIRL OF FIRE AND THORNS and dive into the interview. Elisa has a godstone in her belly button, a magical blue gem that is a symbol of her destiny. Also, much of the book takes place in the desert. My hubby decided to make the godstone and set it on a bed of sand. Without further ado, I give you the cupcake and Rae vs. the Were-llama. 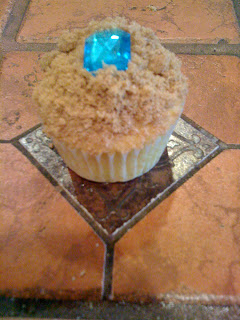 
Hey, I have glowing red eyes, too! But mine are due to late nights staring at a computer screen.

2. I think you missed the salient point of my statement. I can COMMAND OBEDIENCE. What's the point of having glowing red eyes if you can't do that? I like to spit at my enemies from whichever end is closest to them. Do any of your characters have cool abilities like that?

Nothing, and I mean nothing, beats butt-spitting. But my main character, Elisa, has a Godstone, which is a magical jewel, lodged in her belly button. There may or may not be magical spitting from said magical jewel. You’ll have to read to find out.

3. I will grudgingly admit that belly-button spitting is almost as awesome as butt-spitting. Almost. If I had a nickname, it would be The Awesome. You?

The Bluntifier. I have the ability to paralyze people with the power of my socially inappropriate frankness.

4. If you had the power to command obedience with your glowing red eyes, you'd have them paralyzed long before that. I hang around this blog because I love stories. What’s your story about? Bonus points if it includes a llama.

Chosen for an extraordinary--and fearsome--destiny, a sixteen-year-old llama princess becomes the heart of a revolution.

5. Finally! A story that shows true literary genius. You’re making me a cake worthy of my awesome Were-llama status and decorating it to represent your story. What does it look like?

It is sinfully chocolate, with butterscotch frosting shaped into a landscape of sweeping desert dunes to represent your savage beauty.

6. *licks the last of chocolate cake and butterscotch frosting from face* I hope you weren't hoping I'd share. Any Were-llamas in your book?

There is an army of Were-llamas, though they’re disguised as tribal mountain people. Come to think of it, I never actually mention the word “Were-llama” in the book. A technicality. You and I both know that mighty Were-llamas come in many guises.

I think Lord Hector of the Royal Guard might be a Were-llama. It would explain his utter awesomeness.

8. Only a true were-llama can claim the descriptor "utter awesomeness." Llamas or camels and why? Think carefully.

My story takes place in a desert, and there are lots of camels. So I have to take a stand and say CAMELS ARE RAD.

Think about it. They can chew thorns. They can survive long distances with very little water. They have bonafide, certified, Fergie-approved HUMPS. And have you ever heard the phrase “Llama-toe?” No, you have not. Case? Rested.

9. *glares with glowing red eyes* Careful! Or I shall rest YOU six feet below the ground. Besides, it's not like the phrase "camel-toe" is a compliment. I give you a baby Were-llama as a companion. What do you name her?

10. How appropriate. My favorite word is “awesome” because, yanno, look at me. What’s yours?

Viscosity. It’s a word every Were-llama worth her spit is fond of.

11. I am the Queen of Viscosity. Want proof? Keep singing the camel's praises. *readies a load of spit* As a young Were-llama, I dreamt of taking over the eastern seaboard one face full of spit at a time. What did you dream of doing when you were young?

I dreamt of discovering I was adopted and that my birth parents, who were royalty and wealthy beyond imagining, had hidden me away to learn how commoners lived so I would better appreciate my eventual existence of fame and fortune. Also, dating Luke Skywalker.

12. Who, incidentally, is half were-llama. His father, of course, is ALL were-llama. Cake or cookies?

14. Oh, you'll share it with ME. *aims glowing red eyes your way and commands obedience* The Zombie Goat invasion is upon us. How will you fight them off?

Llamas may be the lesser cousins of camels, but no one doubts their bravery. For this reason, they will be the front line of the Zombie-Goat-Defeating Army of Even-Toed Ungulates. Camels will make up the second defensive wave, and I promise you, they will weep as they step over the broken bodies of their comrades. 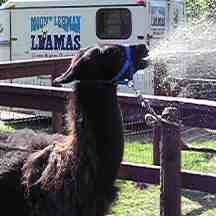 Thank you, Rae, for the fabulous interview! To learn more about Rae and her books, head to her site. Of course, the funny isn't over yet. Rae is offering a signed copy of GIRL OF FIRE AND THORNS to one lucky commenter. The giveaway is open to North America and will be open until 8 pm Central Time Monday, September 12th. To enter, fill out the following entry form. Be sure to leave a comment for Rae in the blogger comment box below the entry form so she can see it!