Today's blog is brought to you by Shawna Thomas. Her book, ALTERED DESTINY, was just released from Carina Press. 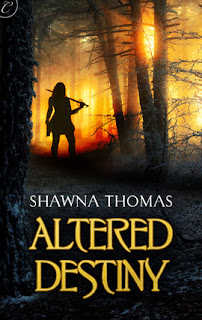 Writing a blog hurts my brain. No, it really does. I'm not one of those naturally outgoing,effervescent people who can talk to anyone about anything. Writing a blog post, especially a guest blog post, is like hosting a party. Now I love to bake, organize and decorate. I'll even serve with a happy heart, but getting the conversations going?

So guest blogging on CJ's blog is like hosting a party for Ivana Trump's friends. You know, they're kinda used to the best. So, just now, I sat down to write this post and I told myself. Okay, Shawna. Be clever. Be witty. Be charming.

And my brain started to hurt.

So what do I write about? Hum dee dee...There was this squirrel war I witnessed while walking home from school the other day. 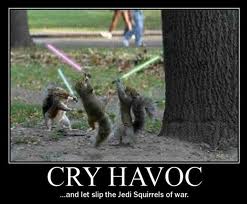 Those squirrels were going at it. Sounded like a legion of squirrels: branches swaying, leaves drifting to the ground, and screeches of enraged squirrels. I walked quickly through the war zone, dodging stray bits of debris and hoping the loser didn't get thrown from the tree and wind up on my head 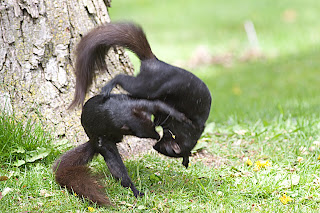 (Would you like a defeated squirrel to fall on you? Didn't think so.)

That reminds me of the stare down I got from a squirrel at the zoo a few months back. A squirrel sat in the middle of a section of heavily treed path, just daring me to try and pass. This squirrel was not budging. In fact, every time I thought about stepping forward, it moved closer, staring at me with these mean, beady eyes. You may think it cowardly, but those suckers are fast, I chose another route. That squirrel meant business.

This talk of squirrels reminds me of CJ and her llamas--don't ask me why, my brain is not linear on its best day.

What if the squirrels joined the llamas? The llamas would have an aerial advantage. It wouldn't be pretty, folks. 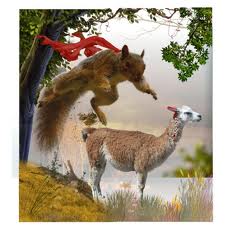 Not pretty at all.

So before CJ's llamas get irritated at my suggestion they need allies, or decide it's a good idea, let tell you why I'm here. Carina Press just released my new book, ALTERED DESTINY--in which there are no llamas, or squirrels for that matter. There is Jaden--a drop-dead gorgeous Svistra, and Selia--one of my favorite heroines ever, who fall in love despite forces attempting to tear them apart. ALTERED DESTINY is a fantasy novel that tends to lean toward YA and will make lovers of romance happy.

Here's a look at ALTERED DESTINY:

Selia has run her family's tavern since she was fifteen and can hunt and fight the equal of any man. When she rescues a badly wounded man and nurses him back to health, she has no idea she's about to change not only her life, but also the destinies of two peoples...

The battered warrior is Svistra—a race of bloodthirsty savages determined to destroy her homeland. Or so the stories claim. Jaden reveals a different truth: how his ancestors were driven into the barren northern mountains. Now they are strong and war parties are pushing south wanting their land back.

The son of a Svistra Commander, Jaden is looking for a way to bring peace to both humans and Svistrans. He tries to ignore his growing passion for Selia, but when she is captured he has to decide what he would be willing to sacrifice to save the woman he loves.