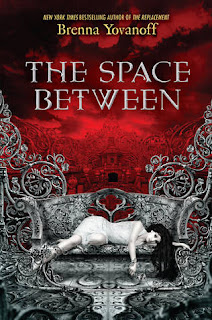 I became a fan of Brenna Yovanoff's writing earlier this year when I read her first book, THE REPLACEMENT. Brenna's writing is vivid, gritty, and full of heart. And she is one of a handful of writers who knows how to write a book from a boy's perspective and have it actually sound authentic. When I saw she had another book hitting the shelves, I couldn't wait to invite her on the blog so I could introduce her to all of you. If you love unique stories and incredible writing, you'll want to pick up Brenna Yovanoff's books! Here's a peek at her latest book, THE SPACE BETWEEN:

Everything burns in Pandemonium, a city in Hell made of chrome and steel, where there is no future and life is an expanse of frozen time. That’s where Daphne lives.

The daughter of a demon and a fallen angel, she wonders what lies in store for her. Will she become a soulless demon like her sisters? Or follow in the footsteps of her brother Obie, whose life is devoted to saving lost souls on Earth? All she wants is to find a place where she belongs.

When Obie saves a bleeding, broken boy named Truman from the brink of death and then suddenly goes missing, Daphne runs away to Earth to find him. But on Earth, everything is colder and more terrifying, and Daphne struggles between her demon instincts and her growing—yet achingly unfamiliar—feelings for Truman. As Daphne and Truman search for Obie, they must navigate the jealousies and alliances of the violent archangels who stand in their way. But Daphne also discovers, unexpectedly, what it means to love and be human in a world where human is the hardest thing to be.

Brenna had a hard time choosing between our interviewers, but eventually she settled on the inimitable Captain Jack Sparrow. Let's meet today's guests.

Before we dive into the interview, it's time to reveal the amazing cupcake my hubby made in honor of THE SPACE BETWEEN. When asked for cupcake design ideas, Brenna told me the predominant colors in her book are red, black, and silver, and that there are flowers in Pandemonium. From that, my hubby envisioned a corrupt, macabre flower and then turned that vision into a cupcake that is truly worthy of a place in my growing Creepy Cupcake Hall of Fame. Without further ado, I give you the hellflower cupcake and Brenna vs. Captain Jack!


I prefer to think of myself as a pirate operative, happily and sneakily ensconced within the ranks of Her Majesty's Royal navy.

2. A lovely lady skilled in the art of treasonous spying? I'm intrigued already. What’s your favorite thing to do in Tortuga?

In Tortuga, the only decent thing to do is assemble a band of cutthroats and plan for the next escapade. Also, dancing.

3. Darling, I'll keep an eye on your band of cutthroats while you dance the night away. What's that? Of course your merry band of murderers will still be there in the morning. Do you take me for a thief? You wound me. I’m offering you free passage aboard my ship to anywhere in the world. Where shall we go, love?

Let's first take a quick jaunt through the Canary Islands, and then set out for the end of the world.

4. Who is the hero of your story most like: me (savvy, debonair, and unquestionably smooth with the ladies), the insufferably honorable Will Turner, or that deceptive little minx Elizabeth?

While none of my heroes would be described as insufferably honorable, there is a certain quality of the classic do-gooder to my heroine Daphne. But that’s only because she doesn’t know any better.

Most. The most rum.

6. A treasonous spy, a leader of a band of cutthroats, and now a woman who can drink me under the table? Where have you been all my life? Wait. You weren't planning on drinking MY rum, were you? Which leads me to the age old question: Why is the rum always gone?

Because it is infinitely more delicious than gin.

7. Gin is for ladies and stiff-collared members of Her Majesty's Navy. What’s the most piratish thing you’ve ever done?

8. Darling, you had me at scaling towers. Are they rules? Or more like guidelines?

9. I'd like to get better acquainted with your imagination. *winks* I understand you’re a story-teller. Any undead monkeys in your stories?

No undead monkeys at this time, but that’s not to say it will never happen. Until then, undead everything else!

10. You're better off. Undead ANYTHING ELSE is better than an undead monkey, curse his vicious primate soul. Which reminds me. Any curses in your book? Heartless monsters? Irritating women who insist on taking matters into their own hands?

No, yes, and my personal favorite, always.

11. One of my favorite words is “egregious.” Care to share one of yours, love?

My favorite word is diplomacy. It means the kind of lying that people can all agree on.

12. As long as diplomacy means I get to keep my ship, my rum, and the girl, I'm all for it. Parlay? Or draw your sword?

Parlay. With a cutlass behind my back, and a knife in my shoe.

13. I see I need to thoroughly search you before allowing you aboard my ship. The prospect is not without its allure. You’ve got a crowd of cursed sailors and a nasty sea monster on your trail. How do you escape?

With a grace and daring unparalleled by any ordinary adventurer. But I can’t divulge the details. It would ruin the surprise.

14. In other words, you don't have a plan. You like to make it up as you go along. Fortunately, I understand and even approve of that sort of problem-solving method. It has worked well for me in the past. Romantic night in? Or adventure on the high seas?

Romantic night on the high seas, against the picturesque backdrop of charging brigands and a gently-exploding powder keg.

15. You are a little pirate, aren't you? *offers arm* Shall we make that dream a reality? My personal motto is: Take what you want, give nothing back. What’s yours?

Almost everything is survivable.


Thank you, Brenna, for such an entertaining interview! Of course, the fun isn't over yet. Brenna is offering a signed copy of THE SPACE BETWEEN to one lucky winner! The contest is open to North America and closes at 8 p.m. Central Time Monday, November 14, 2011. To enter, simply fill out the entry form below. And don't forget to leave a comment for Brenna in the blogger comment section below the form!

Good luck to all and happy reading!