*Special thanks to Twitter follower xHeatherxMariex for the title.

1. I had a post planned for today--my first day back from the holiday I took from writing real blog posts. 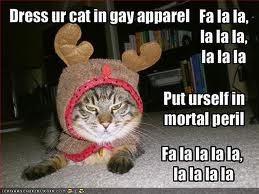 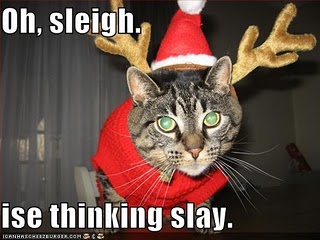 4. But certain events have conspired to change the theme of my post. And NOW the visual aid looks like this: 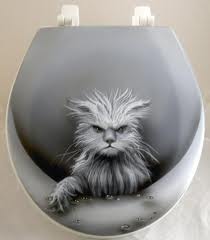 6. Over the years, I've discovered that I (most inexplicably) have a nemesis or two out there. Chicken nuggets. Gravity. Beth Revis.

9. I could continue, but I think you get the picture. I've even devoted an entire post to one of my more determined opponents--that spawn of Satan we call the automatically flushing toilet.

10. I made the grievous mistake of believing that I could openly discuss the toilet's actions in a public forum with impunity.

12. Apparently, the automatically flushing toilet takes exception to a frank discussion of its (lengthy) list of faults.

13. And apparently, I'm on the short list of Those Who Must Be Neutralized.

14. The toilet has, in various locations, tried to wound me.

15. Multiple flushes with a line of women waiting. Flushes with cruel suction and drafty drafts where no drafts should go. Flat-out refusals to flush, no matter how much I threaten its mama.

16. But these actions, while inconvenient and annoying, did not strike fear in my heart.

17. And any worthy nemesis will tell you there's no point in being a nemesis if you can't strike fear in your opponent's heart.


19. I took the teenager to see Mission Impossible 4.

20. As I walked into the theater, I realized two things. 1. I was about to drink a significant amount of Diet Coke. 2. I've carried three babies, all of whom parked right on top of my bladder and traumatized it for life. I needed to go into this movie on EMPTY.

23. I don't know how the dastardly deed was accomplished (though I suspect a paid professional), but somehow the toilet KNEW which stall I would choose.

24. And it KNEW I would be wearing shoes without much traction.

25. And it KNEW all the various laws of physics that would work to its advantage.

28. I, on the other hand, had grown complacent, and therefore I was easy pickings.

29. I walked down the line of stalls, saw one with an open door, and stepped over the threshold right into a puddle of water.

30. Have you ever been water skiing?

31. It can be fun, under the right circumstances.

32. You know, the circumstances in which you are in a warm, sunny location being pulled by a boat.

33. The circumstances in which if you lose your balance, you simple sink into the water and start swimming.

34. These were NOT those circumstances, but there I was. Water skiing.

35. Fortunately, it was a short journey. There's only a couple of feet between the doorway and the toilet.

37. Have you ever seen a jack-knifed semi truck?

39. I hit the toilet with my knees (sooo fun), jack-knifed at the waist, and had the presence of mind to slam my arms onto the toilet seat mere seconds before my face hit the water.

41. I do not think there's enough therapy in the world to recover from giving oneself a swirly in a public restroom with the stall door wide open for all the other occupants of the restroom to stand there and take bets on how long it will take you to surface.

42. I nearly scrubbed my skin off as I washed up and left the restroom.

43. On the way home, I contemplated all the ways in which I would now have to be wary whenever I got desperate enough to use a public restroom.

44. And then I got home, walked into my own familiar bathroom and stepped (barefoot) on a wad of chewing gum. (I have boys. Why are you surprised?)

45. I'd like to tidy up the end of this post with a pithy little remark, but honestly? I just nearly did a face-plant into a public toilet.