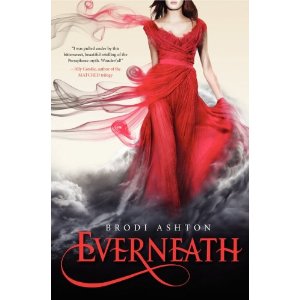 Today I'm thrilled to have Brodi Ashton, a fellow Balzer + Bray author, on the blog. I received an ARC of EVERNEATH (which hits the shelves 1/24) in the "welcome to B+B" package my editor sent. I was instantly drawn to the gorgeous and mysterious cover, so I decided to read it right away. Holy. Freaking. Cow. This book is amazing. It is beautifully written (I've never seen an author play with a timeline so successfully), the stakes are incredibly high, and it made me FEEL things. I cried, dear reader. And I also cursed Brodi's name for making me really like the villain. And the ending! *cries and screams and bribes her editor for an ARC of book two* If you don't read another book this year, you have to read this one. Trust me. Here's a peek at EVERNEATH:

Last spring, Nikki Beckett vanished, sucked into an underworld known as the Everneath. Now she’s returned—to her old life, her family, her boyfriend—before she’s banished back to the underworld . . . this time forever. She has six months before the Everneath comes to claim her, six months for good-byes she can’t find the words for, six months to find redemption, if it exists.

Nikki longs to spend these precious months forgetting the Everneath and trying to reconnect with her boyfriend, Jack, the person most devastated by her disappearance—and the one person she loves more than anything. But there’s just one problem: Cole, the smoldering immortal who enticed her to the Everneath in the first place, has followed Nikki home. Cole wants to take over the throne in the underworld and is convinced Nikki is the key to making it happen. And he’ll do whatever it takes to bring her back, this time as his queen.

As Nikki’s time on the Surface draws to a close and her relationships begin slipping from her grasp, she is forced to make the hardest decision of her life: find a way to cheat fate and remain on the Surface with Jack or return to the Everneath and become Cole’s queen.

Everneath is a captivating story of love, loss, and immortality from debut author Brodi Ashton.

I'm TeamJack all the way, baby. Except when I'm TeamCole ... *sigh* Brodi decided to take on our very own Captain Jack Sparrow, so before we get to the interview, let's meet today's guests.


Of course, before we get to the interview, we get to reveal the amazing cupcake my hubby made in honor of EVERNEATH. Cole (the smouldering immortal from the book's description) plays the guitar for a band called The Dead Elvises. My hubby made Cole's guitar pick hovering over a pit of underworld smoke. Isn't it amazing? Without further ado, I give you the awesome cupcake and Brodi vs. Captain Jack Sparrow. 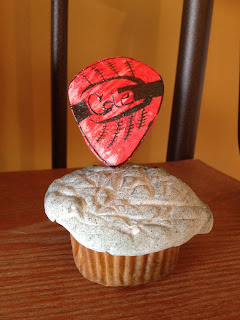 
Well, I have to go with the pirate, mostly because the royal navy sounds a little boring, and I would hate to appear boring (she typed, as she sat in her house robe, sipping her tea, and wondering when she was going to take a shower next.)

But pirates probably don’t shower much either, so I’m a pirate!

2. So, you're saying your only qualification for being a pirate is a lack of personal hygiene? *sniffs* Darling, I've met freshly bathed pirates who smelled worse than you. You'll have to do better than that. What’s your favorite thing to do in Tortuga?

Oh, the usual. Pillage and plunder, and prune the hedges of many small villages.

3. I'm with you on the pillage and the plunder, but I'm rather hoping "prune the hedges" is a euphemism for something I probably shouldn't mention in polite company. I’m offering you free passage aboard my ship to anywhere in the world. Where shall we go, love?

I’m so happy you asked. We shall go to London. It is my favorite place in the world, and it’s where I went to school. I’m dying to go back.

4. Right into the clutches of that fat, foppish frumpet who sits on the throne? Darling, I begin to think you are one warm shower away from being a member of His Majesty's navy. Who is the hero of your story most like: me (savvy, debonair, and unquestionably smooth with the ladies), the insufferably honorable Will Turner, or that deceptive little minx Elizabeth?

5. I once lost my dignity, my appetite, and my hat because of one bad choice. I can sympathize. Rum? Or more rum?

6. Mmm, a woman who likes to have her cake and drink it too. Skip the shower. You may prune my hedges instead. While dining on rum cake, of course. Which leads me to the age old question: Why is the rum always gone?

In my book, it would be because the rock band The Dead Elvises made it to the rum first.

7. Scurvy bilge rats. *draws sword* Touch my rum once more, and I'll make sure the name "Dead Elvises" is entirely accurate. What’s the most piratish thing you’ve ever done?

You know that scene where they are dancing around a giant bonfire, fueled by rum? Well, when I was a girl scout, I made a fire. :)

8. As long as you don't use my rum to make the fire, we're peachy, love. Are they rules? Or more like guidelines?

Guidelines. Especially when I need them to be more like guidelines.

9. Never once have I failed to need them to be more like guidelines. I understand you’re a story-teller. Any undead monkeys in your stories?

No. But there are undead in my story.

10. The Elvises, apparently, though that could change at any moment. *watches rum like a hawk* Any curses? Heartless monsters? Irritating women who insist on taking matters into their own hands?

There are definitely heartless monsters. And by that, I mean the bad guy literally doesn’t have a heart.

11. Interesting. The bad guy in my world doesn't have a heart either. Or he didn't until I found it and stuffed it in a jar of dirt, but that's a rather messy tale for another day. One of my favorite words is “egregious.” Care to share one of yours, love?

That’s crazy, because I LOVE the word egregious! I’m also partial to “bulbous bouffant”, “macadamia”, and “gazebo”. But my favorite word of all time is “penultimate”.

13. Now you're talking. You’ve got a crowd of cursed sailors and a nasty sea monster on your trail. How do you escape?

14. Tried that. Didn't work. Better bring your hedge pruners with you just in case. Romantic night in? Or adventure on the high seas?

15. As long as I get the rum, you can do whatever you like. My personal motto is: Take what you want, give nothing back. What’s yours?

Thank you, Brodi, for such an entertaining interview. Of course, the fun isn't over yet! Brodi is giving away a signed EVERNEATH. The giveaway is open internationally and will run until 8 p.m. central time Monday, January 9th. To enter, simply fill out the form below and be sure to leave Brodi a comment at the bottom of this post.

To find out more about Brodi, visit her site. To purchase a copy of EVERNEATH, go here.