Today's Author Mad Libs guest is Rachel Hawkins, author of the best-selling Hex Hall series. The final book in the series, SPELL BOUND, will be in a bookstore near you on March 13, 2012. I sent Rachel a parts of speech list. She sent back words. This is the result. 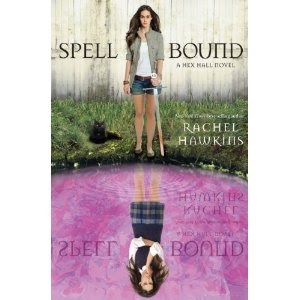 Hailed as “impossible to _defenestrate_,” the Hex Hall series has both critics and _Pudding Pops_ cheering. With a winning combination of romance, _grapefruit_, magic and humor, this third _dime_ will leave readers _spankable_.


Just as Sophie Mercer has come to accept her extraordinary_funky_powers as a _cupcake_, the Prodigium Council strips them away. Now Sophie is defenseless, alone, and at the mercy of her sworn _gnomes_—the Brannicks, a family of warrior _gnomes (again!)_ who hunt down the Prodigium. Or at least that’s what Sophie thinks, until she makes a _scintillating_ discovery. The Brannicks know an epic _butt_ is coming, and they believe Sophie is the only one _calm_ enough to stop the world from ending. But without her magic, Sophie isn’t as _freaking_.

Sophie’s bound for one hell of a _mountain lion_—can she get her powers back before it’s too late?

Rachel Hawkins is a 20-something former _David Hasselhoff_ who left teaching to take a chance and get serious about finishing that _Snuggie_ she'd always wanted to _freak_ Her first book, Hex Hall, was the result of that leap of faith. She's a _TARDIS_ of Auburn University in Alabama and lives with her husband and six-year-old _pineapple_.


She's also hopelessly addicted to watching Downton _Chicken_ and Dr. _She_, and I have it on good authority that she regularly _gyrates_ about popular _tacos_.


Thank you, Rachel, for that highly entertaining post! To learn more about Rachel (And really ... after this? Who could resist?) visit her blog. To purchase SPELL BOUND, or any of the Hex Hall books, head to Indie Bound, Barnes and Noble, or Amazon.