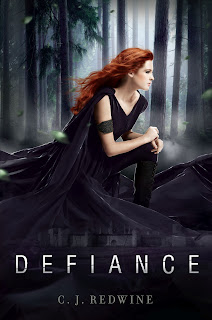 I'm thrilled to welcome my amazing editor Kristin Daly Rens to the blog today! Not only is she an insightful, talented editor who brings out the best in her authors, she's also a genuinely awesome person through and through. She decided to come on the blog today to publicize my forthcoming debut, DEFIANCE. Here's a look at what DEFIANCE is about:


At nineteen, Logan McEntire is many things. Orphan. Outcast. Inventor. As apprentice to the city’s top courier, Logan is focused on learning his trade so he can escape the tyranny of Baalboden. But his plan never included being responsible for his mentor’s impulsive daughter. Logan is determined to protect her, but when his escape plan goes wrong and Rachel pays the price, he realizes he has more at stake than disappointing Jared.


As Rachel and Logan battle their way through the Wasteland, stalked by a monster that can’t be killed and an army of assassins out for blood, they discover romance, heartbreak, and a truth that will incite a war decades in the making.

Kristin chose to be interviewed by the Were-llama. Not only does she find him adorable, but there's a fun story of epic awkwardness behind her choice. On the day I sold DEFIANCE, I spent an hour talking with each editor involved in the auction. Kristin was my first phone call of the day. I was both excited and nervous! And when I'm excited and nervous, my mouth tends to outdistance my brain. I opened our conversation with the following statement: "I had a dream last night that I showed up at the Harper Collins office dressed like a llama!" And immediately after I said it, I thought to myself SHUTUPRIGHTNOWWHATAREYOUDOINGOMG???? But Kristin found it amusing, connected with me on a deep level over my story, and after I signed with her, she sent me a box of books and a stuffed llama. <3

Of course, my hubby designed a cupcake for today's interview. Because he also had a groom's cake due, he eschewed all of my more complicated suggestions (There should be a sword in the middle of real flames! You could do the monster's head coming out of the cupcake and breathing FIRE! You could make a little mini city-state!) and instead, made a cupcake that captures Rachel facing down the beast. Without further ado, I give you the cupcake and Kristin vs. the Were-llama. 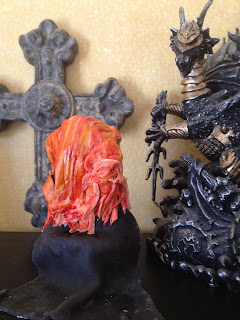 1. So, you’re an editor. I’m a super-scary shape-shifter who can command obedience with the awesome power of my glowing red eyes. What do we have in common?

2. I will pit my glowing red eyes against your skinny green pencil any day. I like to spit at my enemies from whichever end is closest to them. Do any of the characters in DEFIANCE have cool abilities like that?

Unfortunately, neither Rachel nor Logan is a spitter—from either end—but Rachel DOES wield a mean sword. Not to mention a totally badass weapon called a Switch, which is basically a wooden walking staff, with a spring-loaded double-edged blade on one end, and a mallet-like weight heavy enough to crush a man’s skull on the other. And Logan is an inventor who creates all kinds of crazy stuff—weapons, explosives, tracking devices…magnetic hand-grips to help you climb over the wall that surrounds your city and escape. You get the idea.

3. They sound like worthy minions for the Were-llama. Even if they are sadly deficient in spitting abilities. If I had a nickname, it would be The Awesome. You?

4. I hang around this blog because I love stories. What’s your story about? Bonus points if it includes a llama.

DEFIANCE is the story of Rachel Adams, whose father is the top courier in Baalboden, a walled city-state where the serpentine Cursed One lurks outside the town walls, while the brutal Commander rules within, and every girl must have a Protector with her at all times. But when Rachel’s father disappears on a mission, leaving her under the Protection of his apprentice Logan—whom she has despised ever since she told him she loved him and he turned her down—Rachel knows that she’s the only one who can find him. So she embarks on a high-stakes journey outside the walls to find her father and the mysterious package that he was carrying—a package that the Commander will stop at nothing to get his hands on. And as they follow her father’s tracks and fend off attacks from the Cursed One, she and Logan forge a bond that even the Commander’s iron fist can’t break.


Really, this book’s got it all: danger, swashbuckling battle scenes, and of course, romantic tension that is absolutely through the roof—full of longing, and misunderstandings, and forbidden love, all heightened by the fact that Logan has now become Rachel’s guardian. It ROCKS.

5. I see a regrettable lack of llamas listed in that description. You’re making me a cake worthy of my awesome Were-llama status and decorating it to represent DEFIANCE. What does it look like?

A city with a towering wall around it! No…a slithering, fire-breathing beast! No…a sword-wielding redhead! Ack! I can’t decide! But there should definitely be FIRE.

6. Any Were-llamas in your book?

No Were-llamas, alas—talk about a missed opportunity! But there are delicious baked goods like sticky buns and raisin loaves; a fire-breathing serpentlike creature stalking our heroes; and lots of cool technology that blows stuff up, Not to mention a very steamy smooch in a lake. So maybe that makes up for the absence of Were-llamas at least a little bit?

7. If you think sticky buns and kisses in unsanitary lake water make up for the stunning lack of llamas in this book, you are sadly mistaken, Madam. I will give you one more chance to redeem yourself before I forget that you called me adorable and begin a campaign of spit in your general direction. Anyone who might be a Were-llama and you just haven’t figured it out yet?

Um, have you looked at the person who runs this blog lately?

8. I am not appeased. Llamas or camels and why? Think carefully.

Llamas, CLEARLY. And not just because you can spit at me from either end.

9. You have mollified me for the moment. I will hold back the mighty llama spit glands unless you give further offense. I give you a baby Were-llama as a companion. What do you name her?

10. Acceptable. My favorite word is “awesome” because, yanno, look at me. What’s yours?

Pithy. Because I am so not.

11. This is when it's helpful to practice one's spitting ability. No reply is as pithy as a face full of spit. As a young Were-llama, I dreamt of taking over the eastern seaboard one face full of spit at a time. What did you dream of doing when you were young?

I dreamt of being a private detective like my then-idol, Nancy Drew. I even went to my third-grade career day dressed in a trench coat over my St. Elizabeth Ann Seton uniform, with a notebook, magnifying glass, and “fingerprint powder” (which was really some talcum powder I pilfered from home). Clearly, my love of Nancy Drew was a precursor to my current Veronica Mars obsession.

13. I cannot help but approve. Do you share chocolate?

Only with my husband, because he’s wonderful and amazing—not to mention he actually finds it cute that I constantly have my nose buried in a manuscript (I am a very lucky woman, I know). And with my Assistant Editor of Awesome, Sara Sargent, because she runs my life and I need to stay on her good side. Other than that, all the chocolate is MINE.

14. *looks up from eating all of YOUR chocolate* I'm sorry, you were saying? The Zombie Goat invasion is upon us. How will you fight them off?

I don’t. I barricade myself in my apartment with my husband, a year’s supply of Diet Coke, Veronica Mars and Buffy DVDs, and some good books until it’s all over.

Thank you so much for the entertaining interview, Kristin! To get to know Kristin better, you can follow her on Twitter - @kristin_rens. Of course, the fun isn't over yet! Kristin is going to give away the very first ARC of DEFIANCE to one lucky reader! To enter, fill out the form below. The contest is open until 8 pm central time Monday, March 5th and is open for North America. Good luck and happy reading!