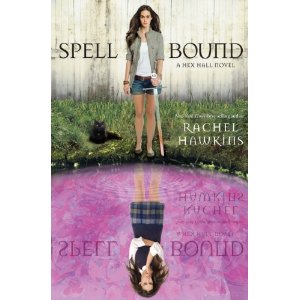 Today, I'm thrilled to welcome back my talented and hilarious friend Rachel Hawkins, author of the best-selling HEX HALL series. Yesterday, the final book in the trilogy came out, and I freely admit I can't wait to find out if Sophie ends up with Archer or with Cal. Um ... and also, yanno, if she saves the world and stuff. But MOSTLY to see if she ends up with Archer or Cal. =D  Here's a peek at SPELL BOUND:

Just as Sophie Mercer has come to accept her extraordinary magical powers as a demon, the Prodigium Council strips them away. Now Sophie is defenseless, alone, and at the mercy of her sworn enemies—the Brannicks, a family of warrior women who hunt down the Prodigium. Or at least that’s what Sophie thinks, until she makes a surprising discovery. The Brannicks know an epic war is coming, and they believe Sophie is the only one powerful enough to stop the world from ending. But without her magic, Sophie isn’t as confident.


Sophie’s bound for one hell of a ride—can she get her powers back before it’s too late?


Rachel agreed to return to the blog (see her earlier interviews here and here) as long as she had the honor of taking on our newest interviewer: Giselle the Pink Sock Monkey. Let's meet today's guests.


Of course we also have the beautiful cupcake my hubby made in honor of SPELL BOUND. This time, Rachel requested a cupcake to represent Ireland, which is a significant setting in the book. (Does she end up with ARCHER or CAL in IRELAND???) Ahem. Where was I? Oh, yes! The cupcake. My hubby wishes to thank Rachel for not requesting the southern gothicness of her first cupcake which, while stunning, took him far longer than this one. Without further ado, I give you the Irish cupcake and Rachel vs. Giselle.


1. I believe a girl should be able to describe herself in a single word. Naturally, the word I’d use for myself is “perfect.” What word best describes you?

Shenanigans. I realize this is not an adjective, but I believe it’s the word most people would agree comes to mind the fastest when one thinks of me.

2. I am unfamiliar with this word. *looks it up* Mischief and prankishness? *sniffs* I would never stoop so low. What's that? Someone messed with your TiVo and recorded Swamp Loggers over all your episodes of Dr. Who? *bats eyes* I'm sure I don't know what you're talking about.

A common misconception about sock monkeys is that we adore socks. This is foolishness. Speaking only for myself, I adore Jimmy Choos and diamonds from Tiffany’s. What are a few of your favorite things?

I have SO many favorite things! I’m very attached to Ink Joy pens, Earl Grey tea, Game of Thrones (both the show AND the books), Doctor Who, and my iPhone. YAY MATERIALISM!

3. Game of Thrones? Spoiler Alert: I win. What? Not that kind of game? That hardly matters. I win anyway. Many crave my approval, but few are clever enough to win it. What are you willing to do to win my favor?

I am a terrible knitter, so I could knit you a truly heinous Sock Monkey Sibling who would always make your gorgeousness THAT MUCH MORE EVIDENT in comparison.

4. I am oddly pleased by this idea. Be sure to use gray yarn. That way we can call her Ellie. Short for Elephant Trunk. If I was a dessert, I’d be a French macaron. Strawberry, of course. Why? Because I am French and pink and altogether lovely. What kind of dessert best describes you and why?

My mom AKA The Mama makes this amazing four layer chocolate pie, so I’m going to go with that. I TOO have many layers and, like The Mama’s pie, one is entirely made of Cool Whip.

5. *pats lips daintily* You mean you had a layer made entirely of Cool Whip. I understand you write stories. Please tell me why the hero of your book would be my perfect boy toy for a day.

I actually have TWO boys. Archer would be a nice fit for you as he is suave, handsome, and could fend off your many admirers with his sword. Cal is ALSO handsome, but a good deal quieter and more stoic. However, he can heal anything, so you’d never have to worry about snagging your yarn on diamonds EVER AGAIN!

6. Lovely. I'll take them both. You Americans love your movies. One day, when Hollywood tells the story of my life, it will be called Gone With The Perfect Pink Monkey. If your life was a movie, what would be the title?

Stealing on of my favorite internet memes, “Oh God, WTF? (And Other Amazing Tales.)”

7. I've had similar thoughts when perusing American reality television. Especially the one located in New Jersey. Pink? Or some lesser, inferior color?

Piiiiiiiiink! And I’m not just saying that to suck up. My entire BEDROOM is pink right now, which was a very valuable lesson for my husband in why one should never say, “I don’t care, do what you want” to me.

I’d be one of the 12 dancing princesses. Going out to a magical fairy land every night, dancing so much you wear holes in your shoes? YES PLEASE. (Although I would NOT be the one who marries that Tattling Dude, thus putting an end to all Fun Dancey Dancey Times. I’d punch him in the junk. )

9. Preach. I am, of course, a fashion trend setter. (Glitter eye shadow? Six inch heels? Retro gowns making a comeback? Yes. You may thank me with your undying adulation.) If you were to start a trend, what would it be?

I would really like to make wearing pajamas all the time an acceptable thing. I mean, I own more jammies than clothes, and some of them are VERY NICE and would be TOTALLY FINE to wear outside.

10. *imagines leaving the house in pajamas* Words fail me. I am addicted to all things French—baguettes, macarons, Chateau Lafite, moi … the list goes on and on. What is your favorite thing from France?

Oooh, I love so many French things! Croissants are really high up there, especially that kind with the little sliver of dark chocolate in the bottom, and… excuse me, I need to go wipe my drool now.

11. Understandable. The French are experts in creating things that cause others to lose control of their salivary glands. *looks in the mirror* Yes. Experts. A smart woman always maintains an air of mystery. Often the art of being mysterious involves doing the unexpected. What is the most unusual thing you’ve ever done?

I DID get stabbed in the head with an arrow once. Seriously. That happened. I had to go to the hospital and everything. I was five at the time, and had been Playing Inappropriately with one of my friends and her dad’s hunting gear (see above, RE: shenanigans). But that was an unusual thing done TO me. AND DON’T THINK I’VE FORGOTTEN IT, GREER CRAWLEY.

12. The level of Inappropriate to which your play must have sunk to involve arrows to the head boggles the mind. I also believe a smart woman always gets the last word. Any last word you’d like to leave with my readers?

BADOW. I believe in always leaving people with FLAIR. And also onomatopoeia.

Thank you, Rachel, for the entertaining interview! (And for letting Sophie end up with Cal. Archer. CAL! ARCHER! *dies*) To learn more about Rachel, visit her site (where you can enter a super cool contest to redesign the cover of SPELL BOUND!). To purchase SPELL BOUND, head to Indie Bound, Books a Million, Barnes & Noble, or Amazon.

The fun isn't over yet! Rachel is giving away a signed copy of SPELL BOUND to one lucky commenter. The giveaway is open internationally, and you have until 8 p.m. central time Monday, March 19th. To enter, fill out the form below. Good luck and happy reading!