Two nights ago, I saw the following picture on Pinterest.  (Link to original pic and comment trail here.) 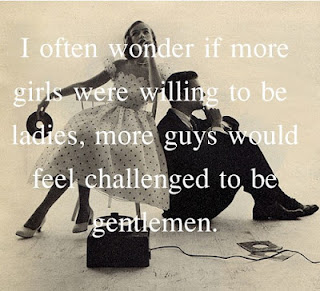 It took maybe 2.5 nanoseconds for anger to kick in. Because honestly? This is a dangerous, dangerous statement. It's a slap in the face to both men and women. I figured others would immediately see that, but the comment trail proved otherwise. Not only was this posted by a woman, but other women commented their approval. (And thousands of people repinned this.) In the comments, sprinkled in among outrage and disagreement, were statements defining what it means to be a lady (dressing up to go grocery shopping, smiling when you feel like crying, deceiving your husband into thinking he has the power ... all of those were mentioned).

And it occurred to me that the underlying assumptions in this statement are still firmly rooted in our culture, and are therefore being passed down to the next generation. So, I want to take a stand. Explain why the statement above is a dangerous lie and why I feel so strongly about it. If the discussion I opened on Twitter about this issue is any indication, there are many who have feelings about this, one way or the other. You are welcome to share your opinions in the comment trail. I welcome a respectful discussion.

Here's what is wrong with that statement:

1. Assumption #1: Men are sheep with a surplus of moral bankruptcy who cannot figure out how to behave unless a girl shows them the way.

This is a lie. Men and women alike are perfectly equipped to understand the difference between right and wrong. And they are able to choose their actions for themselves. There are men who choose to be jerks. Men who choose to be honorable. The key word is choice. A man of integrity treats others with respect, regardless of that person's appearance, economic status, behavior, culture, or beliefs. An honorable man does not allow his behavior to be dictated by the behavior of another. There are many, many men who daily live honorable lives. The men who choose not to live honorably do so for reasons far more complex than the fact that the woman they are treating like a piece of crap isn't wearing a dress to the grocery store. And a man who chooses to behave dishonourably is not going to suddenly "feel challenged" to change his ways simply because a woman is willing to "act like a lady."

2. Assumption #2: There is one perfect ideal that all women must strive to fulfill.

What's your definition of a lady? Maybe it's the same as mine. Maybe it isn't. If you look at the comment trail under the original post, you see that definitions swung wildly from "putting one's best foot forward every day" to "dressing up when you leave the house." Which is right? And what does it mean, specifically, to put one's best foot forward every day? Or, for that matter, what items of clothing are specifically required to count as being "dressed up" when one leaves the house?

Do you see the problem here? With no specific definition for "lady," we slide deeper and deeper into the dangerous "well, she deserved it" territory. And we remove all responsibility for a man's actions from his shoulders and shove it at the woman instead.

3. Assumption #3: The woman is responsible for the man's actions.

This is the most dangerous underlying assumption in the quote. If a woman must be willing to change herself in order to challenge a man to step up to the plate and start behaving like a gentleman, then the reverse is also true: when he fails to behave like a gentleman, it's because she hasn't sufficiently altered her own behavior.

It becomes her fault.

Several commenters couldn't seem to see past the "dress up and more men would step up to open a door for you" mentality to the real sickness that lies inside of this assumption. When men don't behave like gentlemen, they do a lot more than fail to open a door for a girl. They beat her with their fists. They tear her down with their words. They rape her.

According to this way of thinking, those actions are the woman's fault. Before you leap forward and say I'm taking this too far, that people don't actually mean that, allow me to open your eyes. I'm a rape survivor (my story). And I then went on to date an abusive boy who hit me and regularly tore my self-esteem to shreds with his words. Guess what both abusers had in common? They both blamed me for their actions.

But it doesn't stop there. Throughout the years, I've encountered people who after hearing my story say things like "But what were you wearing?" or "Well, you must have done something to set him off."

Why are they saying things like this? Because deep down they believe that if I'd acted more like a lady, the abusers in my life would've been challenged to behave like gentlemen.

And that is a dangerous, dangerous lie.

I want to be so very clear about that. Because some of you reading this post have a man in your life who tells you what he does to you is your fault. And he is lying. Some of you have abuse in your past and you can't look past the moment where you're sure if you'd just done THIS instead of THAT, the entire landscape of your life would have changed. And that is a lie, too. The question isn't "What could I have done to change the way this man hurt me?"

The question is "What kind of sick freak would hurt a woman in the first place?"

Listen to me. Please. Until we rid ourselves of the belief that a man is constantly controlled by his desires and his baser instincts and cannot be held responsible because a woman was "asking for it" or was "allowing it," we will continue to raise girls who don't realize they have the right to be respected. We will continue to have debates over whether a woman dressed up to go clubbing deserved to be raped. We will continue to question how a smart girl could be telling the truth when she says she told her boyfriend no.

Here's the TRUTH: We are each of us fully responsible for our own actions. Fully responsible. I am raising my boys to treat everyone with respect. I am raising my girl to do the same. And I am raising all of my children to understand that if someone hurts them or disrespects them, they should walk away because they deserve better. Not because they fit a certain image of lady or gentleman, but because every person has a right to be treated with dignity and honor.

It's hard to believe we still have debates about mutual respect and responsibility, but apparently we must. Because until asinine statements like the one above disappear from our culture, those of us who see the danger inherent in this line of thinking must step up and speak out.

Feel free to join the discussion in the comments.

One last note: If you (man or woman) are in a situation where someone is hurting you--emotionally or physically--or someone in your past has hurt you, there's help and hope available. Here's a place to get started: RAINN
- March 16, 2012

Email ThisBlogThis!Share to TwitterShare to FacebookShare to Pinterest
Labels: speaking out