Today's Author Mad Libs guest is Barry Wolverton, author of the recently released NEVERSINK (Which just looks fabulous, and can I please request that this be the next Disney animated movie? Kthanx.). I sent Barry a parts of speech list. He sent back words. This is the result. 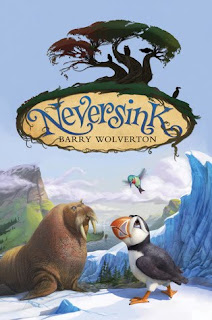 Along the Arctic Circle lies a small _parliament_ called Neversink, whose jagged cliffs and ice-gouged _toes_ are home to a colony of _squidgy_-looking seabirds called auks, including one Lockley J. Puffin. With their _hopeless_ views and plentiful supply of _dolts_, the auks have few concerns—few, save for Lockley's two best _breadcrumbs_, Egbert and Ruby, a know-it-all walrus and a sharp-tongued hummingbird.

But all of this is about to change. Rozbell, the newly crowned _improbability_ of the Owl Parliament, is dealing with a famine on the _wart_ of Tytonia—and he has long had his scheming eyes on the _warty_colony to the north. Now Neversink's _bicyclist_ hangs in the balance. An insurgence of owls will inevitably _fleece_ life as the auks know it—unless Lockley can do something about it.

Barry Wolverton's debut is an epic _volcano_ of some very un-epic birds, a fast-paced and _awkward_ story of survival, friendship, and _grouse_.


Thanks, Barry, for playing along! To learn more about Barry, visit his site. To grab your own copy of NEVERSINK, visit Indie Bound, Books a Million, Barnes & Noble, or Amazon.