Top 5 Reasons Why You Need UNRAVELING 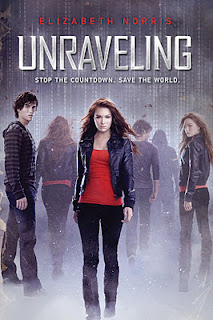 Yesterday, UNRAVELING hit the shelves. I was privileged to read an ARC, and so I thought if you were wondering what book you should pick up next time you head to the bookstore (or, yanno, NOW from Indie Bound, Amazon, or B &N), I'd give you my top five reasons for choosing UNRAVELING.

1. Fringe meets Veronica Mars! Do I even have to elaborate? It's FRINGE meets VERONICA MARS. There is no universe in which that pairing doesn't produce something amazing. Sci-fi, FBI, and a girl with guts, ambition, and brains trying desperately to unravel a mystery before the world ends. Yes, please.

2. Secrets! Think you have it figured out? Think again. Better set aside a chunk of time. You're going to need it. As the mystery unfolds, and the secrets are revealed, you won't want to stop reading.

3. Elizabeth Norris might secretly be Dean Koontz! Okay, no. She isn't. BUT if Dean Koontz wrote YA, I imagine it would be something like UNRAVELING. This book is a thrilling, grab-you-by-the-throat ride from the first chapter to the unbelievable finish. The writing is polished, the pacing is superb, and the romance is woven in around heart-stopping drama with an expert touch.


4. Hellooooo Classroom Debate! Don't think a debate between two high school students sounds like intense, swoony fun? Trust me. The romance in UNRAVELING will change your mind, and the way you look at debates, forever. Um, also? You will never look at washing machines again without fanning your face. So. There's that.

5. Characters FTW! Not only is Janelle an authentic, well-drawn character, the rest of the cast are just as fully developed. Be prepared to become attached. Like white-knuckle-grip attached. Just remember that I have dibs on Ben. I mean, after Janelle's dibs. But totally before yours.