Win a Pre-Order of DEFIANCE! 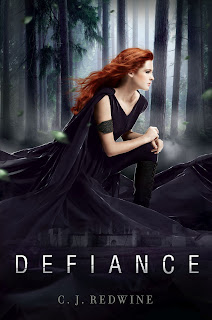 Within the walls of Baalboden, beneath the shadow of the city's brutal leader, Rachel Adams has a secret. While other girls sew dresses and obey their male Protectors, Rachel knows how to survive in the wilderness and deftly wield a sword. When her father, Jared, fails to return from a courier mission and is declared dead, the Commander assigns Rachel a new Protector, her father's apprentice, Logan--the same boy Rachel declared her love for two years ago, and the same one who handed her heart right back to her. Left with nothing but a fierce belief in her father's survival, Rachel decides to escape and find him herself. But treason against the Commander carries a heavy price, and what awaits her in the Wasteland could destroy her.

At nineteen, Logan McEntire is many things. Orphan. Outcast. Inventor. As apprentice to the city's top courier, Logan is focused on learning his trade so he can escape the tyranny of Baalboden. But his plan never included being responsible for his mentor's impulsive daughter. Logan is determined to protect her, but when his escape plan goes wrong and Rachel pays the price, he realizes he has more at stake than disappointing Jared.

As Rachel and Logan battle their way through the Wasteland, stalked by a monster that can't be killed and an army of assassins out for blood, they discover romance, heartbreak, and a truth that will incite a war decades in the making.

Before a book goes out into the world, it gets placed in the hands of a few select readers with the hopes that those readers will love it enough to pimp it so that others will want a piece of that action. (That is totally NOT how Harper explained it to me, but ... there you go.) These select readers craft a sentence or two recommending the book, and that is called a blurb.

DEFIANCE has some very shiny blurbs. Some of those blurbs are official pimpage. Some are friends and family. And a few are the result of a rather brutal shakedown involving ninjas, a dark alley, and one very determined Were-llama.

I'm excited about these blurbs! And everyone knows being excited about something all by yourself isn't nearly as fun as being excited with a group! (Plus, you no longer look like you might need medical help.) So, I'm going to share my blurbs with you--the real, the not so real, and the downright fake. And then I'm going to give you a chance to win a pre-order of DEFIANCE!

Ready for the blurbs? Here they are!

“Spellbinding, romantic, and impossible to put down.” (Julie Kagawa, New York Times Bestselling author of the Iron Fey series and the Blood of Eden series. )


“C.J. Redwine’s DEFIANCE is a gritty, thrilling adventure sprinkled with moments of breathtaking tenderness. I read it in one sitting.” (Rae Carson, Morris Award finalist for THE GIRL OF FIRE AND THORNS )

“DEFIANCE defies all reader expectations, giving us both a post-apocalyptic setting rife with history and a plot that’s as much about the discovery of one’s own humanity as it is about survival.” (Lisa Mantchev, author of EYES LIKE STARS )

"Although DEFIANCE is sprinkled with fantastical elements, it's the raw, genuine intensity of the characters' emotions that makes this book so compelling. CJ Redwine doesn't shy away from talking about loss, grief, and guilt when she's not writing dizzying action sequences and hilarious, sweetly awkward love scenes. This book basically cut out my heart and drop-kicked it, and then hugged me, wiped away my tears, and showed me how to heal." (Alison Cherry, author of RED, coming Fall 2013 from Delacorte)

"Rapid-fire action, a badass heroine, and a plot that moves so quickly I couldn’t catch my breath. In the very best of ways. Try putting DEFIANCE down once you’ve started. I dare you." (Sara McClung, up and coming author and beta reader extraordinaire)

"I never was one to have a "book boy crush," but I must admit I have the biggest one on DEFIANCE's Logan McEntire. It's almost as if CJ wrote him just for me. Don't get me wrong, I love Rachel too. She's feisty and headstrong and braver than I'll ever be. But if I got the chance to fight her for Logan's affections, I so totally would. Not that I'd win. Rachel's father taught her everything she needs to know about survival, and that includes hand-to-hand combat. She'd lay me flat, just like this book will do to you.


DEFIANCE isn't your typical sweeping adventure. Nor is it your typical Dystopian. It's real. It's gritty. And it will break your heart time and time again as you follow Logan and Rachel into the depths of the Wasteland. I can't wait to see where this series ends!" (M.G. Buehrlen, author and amazing critique partner)

"The world building is fabulous. The intermingling of technology and fantasy elements makes me absolutely giddy." (Shannon Dittemore, author of ANGEL EYES)

THE BLURBS GAINED IN A BACK ALLEY SHAKEDOWN:

"Hey Girl, I'd defy my leader and fight assassins any time for you." (Ryan Gosling, or someone who looked just like him.)

"Defiance? Wait. Isn't that a type of liquor?" (Some bum in an alley)

"Read DEFIANCE. Read it or weep. If I let you keep your tear ducts." (the Were-llama)


There they are! Aren't they shiny? Now, it's time to give away two pre-orders of DEFIANCE! To enter, simply write a fake blurb of your own for DEFIANCE! You can base it off the synopsis, the cover, or your Aunt Mildred's famous banana bread. As long as you tie it in to Defiance, it counts. The more dramatic or hysterical or whimsical, the better. Go wild. Truthfulness does not matter here. Put your entry in the comment trail but be sure to fill out the entry form a) so you have extra chances of winning and b) so I know how to contact you if you win!


I'll use random.org to choose two lucky winners! Each will receive a pre-order of DEFIANCE. The contest is open internationally and you have until midnight, central time, July 9th to enter.

Good luck to you!