Today, I welcome debut author Jay Kristoff to the blog for a round of Fast Five! Jay is the author of the highly anticipated STORMDANCER which hits stores this Tuesday. Let's take a peek at his book, and then dive into our Fast Five. 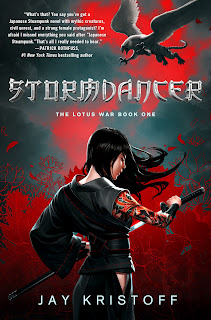 
The Shima Imperium verges on the brink of environmental collapse; an island nation once rich in tradition and myth, now decimated by clockwork industrialization and the machine-worshipers of the Lotus Guild. The skies are red as blood, the land is choked with toxic pollution, and the great spirit animals that once roamed its wilds have departed forever.

The hunters of Shima's imperial court are charged by their Shōgun to capture a thunder tiger – a legendary creature, half-eagle, half-tiger. But any fool knows the beasts have been extinct for more than a century, and the price of failing the Shōgun is death.

Yukiko is a child of the Fox clan, possessed of a talent that if discovered, would see her executed by the Lotus Guild. Accompanying her father on the Shōgun’s hunt, she finds herself stranded: a young woman alone in Shima’s last wilderness, with only a furious, crippled thunder tiger for company. Even though she can hear his thoughts, even though she saved his life, all she knows for certain is he’d rather see her dead than help her.

But together, the pair will form an indomitable friendship, and rise to challenge the might of an empire.

I know I'm not the only one salivating over this book. You can grab your own copy on Indie Bound, Amazon, or Barnes & Noble. You can learn more about Jay and his writing at his site.

For today's Fast Five, I gave Jay a list of topics and asked him to give me five favorites under each topic. Let's get to know the man behind the fabulous Japanese steampunk novel!


Most loved – The Princess Bride

Haven’t seen, but probably should – Bully

Can recite by heart – Aliens

Wish more people had seen it – Brotherhood of the Wolf

Most loved – Where the Wild Things Are

Most hated – My maths textbook

Haven’t read, but probably should – The Last Unicorn

Wish more people had read it – I am the Cheese

Most hated – Anything spicy. Spicy kills me

Most loved – The Wire

Haven’t watched, but probably should – Fringe

Items in your closet

Most loved – My leather jacket

Most hated – My pile of dirty laundry

Haven’t worn in forever, probably should throw it out – My old Pittsburgh Penguins jersey

Why do I have so many – Sneakers


Thanks, Jay! Although our friendship nearly ended when I saw you hadn't yet watched Fringe ... *whispers loudly DOOOO IIIIIIITTTTTT!*

What do you think about Jay's lists? Anything you agree with? Disagree with? Would challenge him to a duel over?