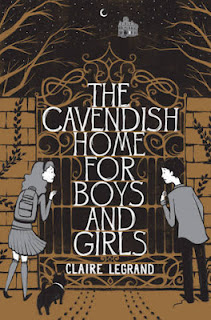 Today, I'm thrilled to welcome the funny and talented Claire Legrand, author of THE CAVENDISH HOME FOR BOYS AND GIRLS, to the blog. I've been anxiously awaiting this book since I first read the synopsis. Creepy house, reluctant but capable heroine, and a mystery to solve? Sign me up! Here's a look at Cavendish:


At the Cavendish Home for Boys and Girls, you will definitely learn your lesson. A dark, timeless, and heartfelt novel for fans of Coraline and The Mysterious Benedict Society.Victoria hates nonsense. There is no need for it when your life is perfect. The only smudge on her pristine life is her best friend Lawrence. He is a disaster—lazy and dreamy, shirt always untucked, obsessed with his silly piano. Victoria often wonders why she ever bothered being his friend. (Lawrence does too.)


But then Lawrence goes missing. And he’s not the only one. Victoria soon discovers that The Cavendish Home for Boys and Girls is not what it appears to be. Kids go in but come out…different. Or they don’t’ come out at all.

If anyone can sort this out, it’s Victoria—even if it means getting a little messy.

I jumped at the chance to have Claire on the blog. She decided to be interviewed by the spitastic Were-llama (brave girl). Let's meet today's guests!

Now that you know who's who, let's dive into the interview!


Well, I’m a big fan of llamas, and I assume you are too, so there’s that. Or is it like you were cursed into being a were-llama, and before you were some other creature, or maybe even a human, so you actually kind of hate llamas now? If so, llamas are sooo dead to me. DOWN WITH LLAMAS.
Also, I can command obedience with the power of my raised eyebrow. It’s not as impressive as glowing red eyes, but it IS more subtle. So boo-yah!

2. You are malleable. I like that in a minion. I like to spit at my enemies from whichever end is closest to them. Do any of your characters have cool abilities like that?

Man, if I were you, I would make sure my butt was always closest to my enemies. Because butt-spit is way more disgusting than mouth-spit. Especially since I assume that, since you’re a magical creature and all, your butt-spit is venomous? Or at least especially pungent?

The main character in Cavendish, Victoria, has some pretty awesome abilities. You know when people say “Man, I win at life”? But they don’t actually win at life, they just managed to do maybe one or two things without screwing them up? Well, Victoria actually DOES win at life. She’s the best at everything. She’s smart, snarky, and stylish, and she undoubtedly has better hair than you.

3. NOBODY HAS BETTER HAIR THAN ME. *glares at you with awesome red eyes* NOBODY. If I had a nickname, it would be The Awesome. You?

4. You are not as malleable as I originally presumed. I shall have to fix that. *readies spit* I hang around this blog because I love stories. What’s your story about? Bonus points if it includes a llama.

That’s another thing you and I have in common, you spitalicious beast, you. We both love stories. Can I get a high five? Are we total BFFs now?

Anyway, my story is about a 12-year-old girl named Victoria whose best friend disappears, disrupting her practically perfect life. When she sets out to investigate, she discovers that her town is hiding many secrets, that other kids have disappeared, too, and that Mrs. Cavendish of the local orphanage is behind it all. See, Mrs. Cavendish likes to take kids and fix them, make them better, smarter, prettier. And if they don’t like it, she’ll make them like it. Or she’ll just get rid of them forever. Diabolical, right? Only Victoria, who wins at life, could possibly stand up to someone like that. Take that, Charlie Sheen! Oh man. Is that totally passé now?

5. One does not simply "high-five" a were-llama. Not unless one wants to be "high-fived" in the face. One bows in absolute deference and AWE. You’re making me a cake worthy of my awesome Were-llama status and decorating it to represent your story. What does it look like?

Well, don’t be grossed out or anything, but it would be one of those cakes made up of cupcakes, and every cupcake would be a little bug, and put together they’d make a GIANT bug, and that bug would have bright red lips and stare at you until your soul shriveled up and flaked off. But in the meantime, you’d sure be eating some awesome cake!

6. The Were-llama's soul is incapable of shriveling. OTHER souls shrivel at the mere THOUGHT of the Were-llama. Any Were-llamas in your book?

Sadly, no. Were-llamas do not exist in Belleville. But I bet Victoria would have loved to have you on her side to fight evil and whatnot, if she could get over the fact that you probably have fleas. Or . . . would you turn to the dark side and support Mrs. Cavendish? You WOULD, wouldn’t you? You fiendish red-eyed beast. No cake for you!

7. The Were-llama does not have fleas. The Were-llama has were-fleas, and your little prissy Victoria, whose hair is NOT better than mine, should tremble. TREMBLE. Anyone in your story who might be a Were-llama and you just haven’t figured it out yet?

You know, Lawrence might be a Were-llama in disguise. Hence Victoria being inexplicably drawn to him despite his disorderliness and lack of hygiene. Not that you smell bad or anything, Were-llama. Nah, you smell like unicorn farts!

8. I smell like AWESOME. I'd bottle it and sell it, but you puny humans cannot survive the AWESOME for long. Llamas or camels and why? Think carefully.

Llamas, all the way! And I’m not just saying that because I’m intimidated and trying to butter you up. I actually wrote a story about a llama once. Maybe someday you can read it! Or butt-spit on it. Man, you’d better not butt-spit on it. I’ll unleash UNICORN’s wrath upon you and then there will be this clash of titans, apocalypse-style. Oh, what’s that? UNICORN? Yeah, he’s only my special unicorn friend, no big.

9. You know how UNICORN got his horn? Yeah, I once kicked him so hard in the posterior region, I sent his tailbone straight out of his forehead. BOO-YAH TO YOU, PUNY HUMAN. I give you a baby Were-llama as a companion. What do you name her?

I would name her Pookie. Because I need more things in my life need Pookie. Plus, just say that out loud. Pookie. Pookie-llama. Poooookieeeeee. Llaaaaamaaaa.

10. It's possible you've been breathing in one too many unicorn farts, puny human. My favorite word is “awesome” because, yanno, look at me. What’s yours?

Discombobulated, because I so often am. Or cellar, because it’s pretty. Or poop, because I like poop jokes, so sue me.

11. Well, in that case, allow me to tell you that when a Were-llama spits on you from his business end, the joke's on you. Literally. As a young Were-llama, I dreamt of taking over the eastern seaboard one face full of spit at a time. What did you dream of doing when you were young?

First of all, I know you meant butt full of spit at a time. Right? Because we’ve already discussed that should be your weapon of choice.

I also really wanted to own a castle. That hasn’t changed.

12. I wanted to be President, too, until I realized I'd rather be Grand High Llama Over All The Universe. Cake or cookies?

Cookies, because one of my favorite things in this world is a sugar cookie from Paradise Bakery. I bite into one and my blood suffuses with joy. A choir of unicorn angels dances on my head. Rainbows explode out of my nose. Needless to say, it’s a damn good cookie. And it beats everything, ever.

13. That is a disturbing image. Do you share chocolate?

14. The Zombie Goat invasion is upon us. How will you fight them off?

With UNICORN, of course! And also, I wouldn’t share chocolate with them (everyone knows that’s a Zombie Goat’s weakness), and then they’d all get sad and go cry in a corner somewhere, and I’d be Heroine Supreme and get a castle. Oh man, this is a fantastic plan. And don’t worry, Were-llama, you’d get your own suite. Just not in the west wing. That’s where I keep Martin Sheen. (Man, two Sheen family references in one interview. I’m on a roll here!)

Foolish puny human! The Were-llama does not get a suite. The Were-llama gets THE ENTIRE UNIVERSE. Including your precious UNICORN and all the chocolate. All of it.   The end.   Thank you, Claire, for such an entertaining interview! To learn more about Claire, visit her site. To grab your very own copy of THE CAVENDISH HOME FOR BOYS AND GIRLS, head to Indie Bound, Barnes & Noble, or Amazon.   Of course, the fun isn't over yet! Claire is offering a signed hardcover of CAVENDISH, and the giveaway is international! You have until midnight EST October 9th to enter. Good luck and happy reading!

a Rafflecopter giveaway
at September 18, 2012