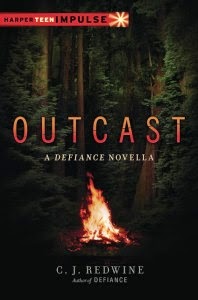 On July 1st, Quinn's story will hit e-readers across the world. I'm very excited to share this DEFIANCE prequel with my readers! Here's a look at OUTCAST:

A thrilling, dangerous adventure, this digital prequel novella to C. J. Redwine's Defiance and Deception features Quinn, a popular character from the series.

Quinn Runningbrook knows a hundred ways to kill a man and make it hurt. He can track, ambush, and torture his prey with terrifying skill—just like his father taught him. But every kill consumes another piece of him, and Quinn longs to stop, to save himself and his sister, Willow, from becoming like his father—a man who kills for entertainment.

But when Quinn refuses to torture a group of trespassers caught too close to the Tree Village where his family lives and instead kills them quickly, he disobeys a direct order from his father . . . and Willow is forced to take his place. Suddenly, Quinn isn't the favored apprentice to the family business of "protecting" the Tree Village anymore. Willow is.

When Jared Adams—a courier from the nearby city-state of Baalboden—is caught traveling too close to their borders, Willow is ordered to kill him. But Quinn knows that Jared doesn't deserve torture or death. And he realizes he has to take action . . . or the fate chosen for Willow and himself by their father will remain carved in stone.

Ready to find out how Quinn became the stoic boy who refuses to carry a weapon? Want some betrayal, family bonds, loyalty, death, and danger? This is the story for you!

In honor of OUTCAST, I'm running a pre-order contest. Everyone who pre-orders OUTCAST and sends a screen cap of the receipt (no need to show me any private financial info, just the Amazon or B&N page showing that it's been ordered) to assistant@cjredwine.com goes in the running for some fun prizes. There are also additional ways to earn entries, as you can see from the entry form below.

1 Grand Prize: A signed ARC of DELIVERANCE and a signed set of bookmarks featuring cover art from DEFIANCE, DECEPTION, and DELIVERANCE.

2 Runner Up Prizes: A signed set of bookmarks featuring cover art from DEFIANCE, DECEPTION, and DELIVERANCE

*You must be 13 or older to enter. If you win and are under the age of 18, you must have a parent or guardian email me your home address because giving your personal info to strangers on the internet is dangerous, even if you think the person can be trusted. :)