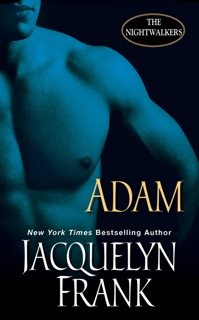 In the mood for a little sultry paranormal romance? Jacquelyn Frank has you covered! Her Nightwalker series combines sexy supernatural alpha males with feisty human women and delivers danger, intrigue, and hot romance. Haven't tried the Nightwalker series yet? Here's a peek at how it all began:


Since time began, there have been Nightwalkers - the races of the night who live in the shadows of the moonlight. Love with humans is absolutely forbidden, and one man makes certain to uphold this ancient law: Jacob, the Enforcer...For 700 Years, He has resisted temptation. But not tonight...Jacob knows the excuses his people give when the madness overtakes them and they fall prey to their lust for humans. He's heard every one and still brought the trespassers to justice. Immune to forbidden desires, uncontrollable hungers, or the curse of the moon, his control is total...until the moment he sees Isabella on a shadowy New York City street. Saving her life wasn't in his plans. Nor were the overwhelming feelings she arouses in him. But the moment he holds her in his arms, everything changes.

On Tuesday, the sixth book in the Nightwalker series came out. Here's a quick look at ADAM:


Haunted by magic, beset by evil, the Nightwalkers face their darkest hour yet. And when the unthinkable happens, only one legendary male has the power, the will, to save them: Adam.


Jacquelyn chose to take on the Were-llama. I guess spending her days creating supernatural creatures gave her the confidence it takes to face down our resident red-eyed shape shifter. Let's meet today's guests.


Now that you know who's who, it's time to reveal the beautiful cupcake my hubby made in honor of Jacquelyn's book. Adam is a water demon. He controls water, and he can even turn into water, which, you have to admit, is a pretty awesome ability to have. My hubby created a cupcake showing Adam in mid-transformation. Without further ado, let's reveal the cupcake and dive into the interview!

I can create legions of super scary shape-shifters who can command obedience with the awesome power of my mind.

2. Legions, you say? *looks over shoulder* I like to spit at my enemies from whichever end is closest to them. Do any of your characters have cool abilities like that?


3. You're welcome. And don't think I'm above calling in that favor. If I had a nickname, it would be The Awesome. You?

The Creative Cat Lady. Some of my fans, however, have dubbed me The Creator.


4. Cat Lady? The awe you inspired in me with the mention of your legions is begin to slip a bit. I hang around this blog because I love stories. What’s your story about? Bonus points if it includes a llama.

This is the sixth book in the NIGHTWALKERS series. ADAM is super secret undercover and under wraps I–could-tell-you-but-I-would-have-to-kill-you story that people have been waiting for for three years. I can definitely say a lot of issues left open will be resolved in this book, and along the way it’s a heck of a rollercoaster ride! Oh, and good sex. No llamas…in this installment. I know, I am ashamed.


5. I fail to see how you can write a good sex scene without a llama. You’re making me a cake worthy of my awesome Were-llama status and decorating it to represent your story. What does it look like?

It’s a picture of all the elements in nature on it. Representing the awesome power of my Demons and their power to manipulate nature.


6. I'd like to see them try to manipulate me. Any Were-llamas in your book?


7. We aren't exactly known for our stealth. It's hard to hide this kind of AWESOME. Anyone who might be a Were-llama and you just haven’t figured it out yet?

I suspect my girlfriend Susan. She is tough as nails and can handle anything that life throws at her. Plus, she’s been known to kick a man and spit on him while he’s down.


8. Sounds promising! Llamas or camels and why? Think carefully.

Camels? What are these camels you speak of?


9. Your street cred has now been restored. I give you a baby Were-llama as a companion. What do you name her?

Douchebag. My other favorite start with F but wasn’t sure I could use it here.


11. Probably wise. Last time I yelled FUNGI! in C.J.'s presence, she refused to give me cake for an entire week. As a young Were-llama, I dreamt of taking over the eastern seaboard one face full of spit at a time. What did you dream of doing when you were young?

When I was young I wanted to be either Wonder Woman or the Bionic Woman. They both kicked ass and were still very sweet women all at the same time.


12. Little known secret: the Bionic Woman was actually a were-llama. Not Wonder Woman, though. A were-llama has too much dignity to ever be caught running around in primary-colored spandex. Cake or cookies?


13. I shall expect a shipment of those to arrive shortly. Do you share chocolate?

Only with those most deserving of it.


14. Which would, of course, be ME. The Zombie Goat invasion is upon us. How will you fight them off?

I will throw sheaves of dead paper before me and they will fall upon it mercilessly. While they are distracted I will pen them up for the Zombie Children’s Petting Zoo. A fate worse than death.


Thank you, Jacquelyn, for such an entertaining interview! I think you had the Were-llama worried about your legions. :) To learn more about Jacquelyn, visit her site. To purchase any books in the Nightwalker series, go here.

Of course, the fun isn't over yet! Jacquelyn is giving away a signed copy of ADAM to one lucky commenter! Please fill out the form below to enter and be sure to leave Jacquelyn a comment after you submit the form. The contest runs until 8 p.m. Central time, Monday October 31st.

Good luck to all and happy reading!