Recently, I attended the movie theater on a Friday night to see this:

Explosions, car chases, nuclear war ... blah, blah, blah. The real question on everyone's mind is this: Where are the llamas?

I'm going to share with you a little known fact. Agent Ethan Hunt is a were-llama. Proof? He survived multiple falls, crashes, and run-ins with unsavory types who appeared bigger and stronger than him. Now, I ask you. What man can do that unless he's a were-llama?

Please. Every were-llama on the planet has "Chuck" as a middle name. 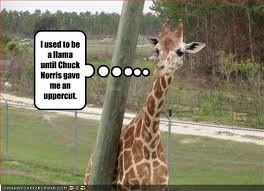 Sadly, the villain in this action-packed thriller was not a were-llama. If I had to guess (and we all know my guesses are gospel), I'd say his mother was a camel and his father smelt of vodka. Sure, he seemed smart enough at first. But peel back a layer or two and you discover a hump full of crazy.

Hunt and his team were smart, savvy, and sometimes funny. Their main problem, besides the camel-for-a-mama villain, was malfunctioning high-tech gadgets. This nearly led to a mission failure of epic proportions several times.

Clearly, the tech wizard on their team did not know how to fully capitalize on Agent Hunt's inner llama. For example, he could have insisted Hunt sound the llama alarm. Nothing intimidates your opponent and alerts your team members to imminent danger like the mighty clarion call of the llama.


I'm sorry, did one of you humans just say the mighty clarion call of the llama sounds like the bed springs at a cheap hotel? DID YOU?

Better rethink those words, you lesser being. Nobody wants me to get Edward involved in this.

Also, I feel the director failed to utilize Hunt's most important weapon--llama spit. No need to disarm your opponent, get in a fist fight, or hope your high-tech gadget doesn't fail you at the last minute! Simply gather one's juices and let fly. No worries that a sexy spy will seduce the secret out of you.

Unless that sexy spy is a were-llama. Then, you are doomed to spill both your secrets and your guts. Oh, you thought the term "spill your guts" was a euphemism? Welcome to pain, son. I'll be your tour guide.

However, despite these obvious failings, the movie was entertaining enough to momentarily distract me from my own incomparable reflection for two hours. Mission Impossible 4: it nearly lived up to my stunning awesomeness. 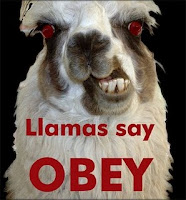 Interviewer extraordinaire, cover model, and super scary shape-shifter, the Were-llama now adds reviewer to his long list of awesome credentials. His views are his own. And because he can command obedience with the awesome power of his glowing red eyes, his views are also YOURS. When the Were-llama wants your opinion, he will give it to you.
- January 06, 2012