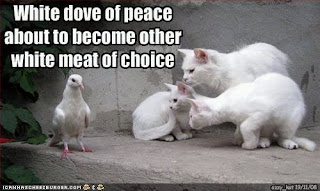 1. We all know cinnamon candy is my weakness.

3. I don't turn down cinnamon candy unless it's obviously been half-chewed by somebody else and then dropped on the floor.

4. Three days ago, I learned a valuable lesson about the danger of that particular vice.

5. Three days ago, a friend and co-worker of mine informed me we were going to sample a new product we'd received--Chocolate Coated Chewy Cinnamon Bears.

7. For one, I'm not a fan of chocolate, and I'm not sure chocolate and cinnamon really go together very well.

9. This was, however, a chewy cinnamon bear, an item rarely sold in stores anymore and, truth be told, my favorite even above Hot Tamales.

11. Seconds later, my gag reflex kicked in and forcibly expelled the foul mouthful even as my brain screamed, "No! Keep chewing!! That's a cinnamon bear--there must be something good about it!"

13. I'm not alone in my opinion. Seven other unwitting employees tried it (mostly because I assured them they'd love it) and everyone gagged and spit it out except one hardy soul who couldn't bear to waste the chocolate.

15. I won't pop cinnamon stuff willy nilly into my mouth from now on.

16. Er...Make that I most likely won't pop cinnamon stuff willy nilly into my mouth from now on.

17. Few things smell worse than a soaking wet dog. *holds nose and glares and sopping wet Chow currently sprawled next to my desk.*

18. I got stuck this past week in the midst of my SF revisions. The characters stopped talking to me, the scenes refused to happen, and I began banging my head against the desk in frustration thinking I'd never figure it out.

19. Yesterday, in my 45 minute break (12 hr shift, 45 min break. Loooong day.), I decided to call Katy and brainstorm, since she is known by one and all as the plotting guru. Or if she isn't, she should be.

20. Within ten minutes, we had it all sorted out, and it's going to rock.

21. I work six days in a row this next week and am looking forward to it in much the same way I looked forward to the one dentist appointment where I knew I was going to get my teeth drilled without the benefit of novocaine.