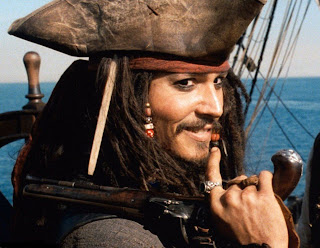 1. Starshine discovered that this past weekend was National Talk Like A Pirate weekend.

2. Since he lives in his imagination anyway, he was quick to get into the spirit of things.

3. The two of us were home alone Sunday morning and the conversation went like this:

Starshine: There's no "okay" on a pirate ship! Argh! Swab the poop decks.

Me: I've swabbed enough poop decks to last me a lifetime.

Starshine: Don't call me sir, matey! You'll walk the plank and be fed to the skeletons.

Me: Hold it, mister.

And Starshine discovered that, while I'm a fan of all things pirate, my penchant for excellent dental hygiene trumps all.

4. Tom Cruise joined facebook, set up a fan site for himself (which makes sense), and wrote a quite lengthy description of himself and his work in which he takes credit for Dustin Hoffman's Rainman Oscar (and the Oscars of anyone else who worked with him, I kid you not), slams others who beat him out for Oscars, and brags about his bankability as "the number one star in Hollywood".

5. I'm not sure which was more staggering...the ego or the insecurity.

6. I'm not saying he isn't a fine actor, and I realize his performance lent itself to his co-star's performance, but saying that someone would never have received their Oscar had they not been starring across from you negates the other actor's talent and hard work and is both rude and wrong.

9. The story for how it got one is long, involved, and still very upsetting to me so I won't share it.

10. I'm using my office computer and my hubby's laptop for my writing and blogging and we're hoping an IT guy my hubby knows might have a cure.

12. Thankfully, my writing is backed up on a flash drive and all is well there.

13. What do teenage boys have against belts?

16. *sigh* It won't be too long before I have a crowd of teenage boys in the house. I might lose many battles with them but I promise they will NOT walk out of this house with their pants one slipperly slide away from a Full Monty.

18. Pumpkin bread, the smell of burning leaves, the gorgeous colors, incredible twilights, a holiday dedicated to rewarding the imagination with candy...what's not to love?

19. Yes, I realize Halloween's origins have nothing to do with candy or rewarding anything, but it's morphed into that today, and we get into the spirit. I'll be hauling out my decorations soon.