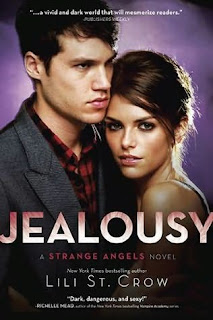 I became a fan of Lili St. Crow (who writes adult urban fantasy as Lilith Saintcrow) a few years ago when I bought one of her books, read it in two days, and immediately headed back to the book store for more. When she began writing YA, I was thrilled! I loved STRANGE ANGELS, the first in her YA series, and each subsequent book has thoroughly hooked me as well. Lili writes adrenalin-fueled books with interesting, imperfect characters and layers of mystery. JEALOUSY is the third in the Strange Angels series. Here's the premise:

Dru Anderson might finally be safe. She’s at the largest Schola on the continent, and beginning to learn what it means to be svetocha–half vampire, half human, and all deadly. If she survives her training, she will be able to take her place in the Order, holding back the vampires and protecting the oblivious normal people.

But a web of lies and betrayals is still closing around her, just when she thinks she can relax a little. Her mentor Christophe is missing, her almost-boyfriend is acting weird, and the bodyguards she’s been assigned seem to know much more than they should. And then there’s the vampire attacks, the strange nightly visits, and the looks everyone keeps giving her. As if she should know something.
Or as if she’s in danger.

Someone high up in the Order is a traitor. They want Dru dead–but first, they want to know what she remembers of the night her mother died. Dru doesn’t want to remember, but it looks like she might have to–especially since once Christophe returns, he’ll be on trial for his life. The only person who can save him is Dru.

The problem is, once she remembers everything, she may not want to…

I'm so excited to announce that Lili is giving away a signed copy of the entire three book Strange Angels series! Before I get to how you can enter to win the set, let me introduce today's guests.

Now that you know who's who, let's get to the interview and reveal the Holy Cow Awesome cupcake my hubby made for Lili. There are all sorts of monsters and scary creatures in Lili's books, and one of the first we're introduced to is a zombie. Not just any zombie, but one who HAUNTED my thoughts for the rest of the book. I won't spoil your reading by telling you why, but ... wow. So, in honor of that, my hubby made a zombie hand cupcake. Without further ado, I give you the cupcake and Lili's interview with Captain Jack. 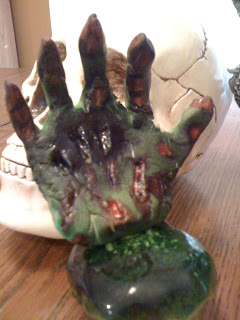 
Oh, well, I suppose I’d have to say whoever paid the most, or who had irritated me least in the last six months. When one’s sailing the high seas, flexibility is everything.

2. Darling, I like the way you think. So few appreciate the art of playing both sides. What’s your favorite thing to do in Tortuga?

So much to choose from! After waking in the early afternoon and starting a rousing little barfight to get the cobwebs out, I think a quiet afternoon’s drinking at that little place with the mouse-and-turtle races is refreshing. Then, as darkness falls, a little gambling at that place where you had your moustache singed off by the Greek. (Remember him? He sends his love. And this knife, which I’m supposed to bury in your ribs, but I decided I liked it better for someone else’s ribs.) Anyway, after one has won a few rounds and sobered up a little, one goes to a filthy stinking alley where one gives the password of the week, and goes up the stairs to the Pirate’s Library. Where I will continue my studies, at least until dawn rises and I turn in at Madame Moriarty’s Misfortune House. I find I sleep better there.

Now that’s what I call a perfect day.


3. I admit, I'm especially partial to the part of your day where you DON'T stick a knife into my ribs. I’m offering you free passage aboard my ship to anywhere in the world. Where shall we go, love?

The horizon, of course. Where else?

4. A woman who plays both sides and wants the horizon? Where have you been all my life? Who is the hero of your story most like: me (savvy, debonair, and unquestionably smooth with the ladies), the insufferably honorable Will Turner, or that deceptive little minx Elizabeth?

I believe my hero should be more like Davy Jones. He suffers for love in a way Elizabeth and Will don’t. And Jack, we know you don’t love anything but your ship. You’re a psychopomp. Don’t take it the wrong way, I say it to all the lovely ambiguous pirate captains.

5. It's such a lovely word, I'll take it any way you choose to serve it. Rum? Or more rum?

Yes. And yes. And some coffee to put the rum in when I want to wake up. Plus the rum cake, rum raisins, and a rum go.

6. You can keep your coffee. I just want the rum. Which leads me to the age old question: Why is the rum always gone?

Because you fell asleep and someone pinched it, for heaven’s sake. Either that or one had a bad day and needed a pick-me-up. There was also that one time when you dumped the shipment. Don’t remind me of that, I’ve only recently decided not to take you to task for it and I can change my mind at any time.

7. *looks around for a suitable distraction* Hey! Is that a fourteen-toed squid I see climbing up the side of my ship? *congratulates self on avoiding being taken to task for anything* What’s the most piratish thing you’ve ever done?

Having children. Definitely. Nothing teaches you the flexibility of guidelines like they do. And nothing else will make you rethink your entire life on a daily basis to quite the degree children do.

8. *shudders* I don't personally care to test that theory. Are they rules? Or more like guidelines?

In some cases they’re rules. In others, they’re guidelines. Knowing the difference is the pirate’s art.

9. Indeed. I understand you’re a story-teller. Any undead monkeys in your stories?

For you, darling, anything. I’ll put an undead monkey into a story just for you. I have had a zombie and a patricide in the first three chapters, though. Might that count?

10. If you put an undead monkey in your story, be sure to find a way to take the "un" out of the equation. Any curses? Heartless monsters? Irritating women who insist on taking matters into their own hands?

Loads of curses. Yes, lots of heartless monsters, too. Hmmm…you know, come to think of it, I don’t think I write anything other than irritating women who insist on taking matters into their own hands. Go figure.

11. I see I need to keep a weather eye on you. One of my favorite words is “egregious.” Care to share one of yours, love?

I always get a little thrill out of “paradoxical.” And I love the way “lyrical” sounds as it trips off the tongue. Words are a sensual pleasure for me.

12. *fans self* Darling, you had me at paradoxical. Parlay? Or draw your sword?

13. I do love the sight of a woman with a sword. You’ve got a crowd of cursed sailors and a nasty sea monster on your trail. How do you escape?

Escape? No, no, dearie. I turn around, harangue or cannonade the cursed sailors until they elect me their captain by dint of my sheer ferocity, then we take on the sea monster. Which will either end up my pet (I think Snuggles would be a darling name, don’t you?) or a very large hide and an interesting story, both to sell in Tortuga.

14. While I appreciate your sheer ferocity, I must take issue with the name Snuggles. May I suggest the name Larry instead? Romantic night in? Or adventure on the high seas?
Adventure. I rather think romance is overrated, at least for me. Don’t get me wrong—I love writing it, and I like reading it. But when it comes to real life, give me the high seas.

15. You truly are my other half, aren't you? My personal motto is: Take what you want, give nothing back. What’s yours?

Potius mori quam foedari. Latin, that. “Rather to die than to be dishonored.” The principle’s served me well so far.

Thank you, Lili, for such an enjoyable interview! You were more than a match for our dear Captain. To learn more about Lili and her books, head to her website. And now, for Lili's exciting giveaway! She's giving away a signed 3 book set (Strange Angels, Betrayals, Jealousy). U.S. entries only, please. Here's how to enter.

The contest is open until 8 p.m. (central time) Sunday, January 30th. Please check back to see if you've won and to claim your prize!