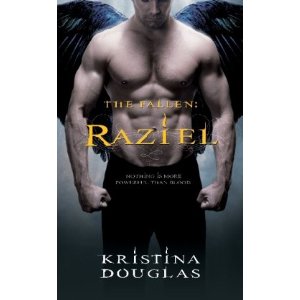 When my agent Holly told me her friend Abby Zidle, an editor with Pocket books, wanted to take on the Spork of Doom, I said (in my sporkiest voice), "Bring it!" And she did. Abby's official bio reads:
Abby Zidle is a senior editor for Gallery and Pocket Books, where she acquires a variety of commercial fiction and nonfiction.  She loves sexy romances, horseback riding, and trashy television, and has a cat named Wally who likes to be spun on her kitchen floor.  She is known to a select few fellow publishing goofballs as the Wombat of Terror, due to her general aversion to conflict of any sort. She should probably not be broadcasting this to her professional contacts.
But along with an awesome interview with the SoD, she brought one of her January releases to give away! Here's the premise:

Kristina Douglas’s sizzling debut series introduces a realm of fallen angels and ruthless demons, where an eternal rebellion is brewing… and one unsuspecting woman can change the fate of the Fallen forever. The first novel, The Fallen: Raziel, features Raziel, a fallen angel, and Allie, a mortal whose death catapults her into a supernatural world filled with angels, demons — and true love.﻿

We'll get to how you can win a copy of Raziel right after the interview, but first, let me introduce today's guests.
﻿﻿ ﻿﻿
﻿﻿ ﻿
Now that you know who's who, it's time to reveal the cupcake my hubby made for Abby and dive into the interview. But first, in an unprecedented move, my hubby wrote a somewhat aggressive note to accompany the cupcake. It seemed appropriate that the Wombat of Terror be the one to take on the Spork of Doom, and so she asked for a wombat cupcake. Turns out? Designing a wombat out of cake is harder than it sounds. So, without further ado, I give you the cupcake, the note, and the interview! 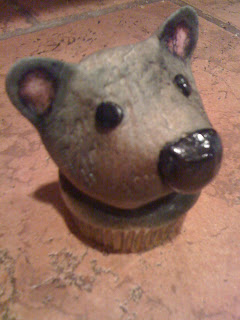 This is the artist's interpretation of a wombat. If the viewer doesn't like it they can: 1: make their own wombat cupcake, 2: feel the wrath of my raspberry of dooooom (pbttttttttttt), or 3: choke on a vegemite sandwich.

The Wombat of Terror is an A+ minion—I am a natural second-in-command. Wikipedia tells us “wombats are not commonly seen, but leave ample evidence of their passage, treating fences as minor inconveniences to be gone through or under.” In the same way, if the Spork says “make it so,” I will totally dig the hole to hide the body of that hobo you killed.

2. I like it. Although I'm not into hobos. With world domination as my goal, I have to start somewhere higher up the food chain. Being a Spork of Doom takes moxie. What’s the sporkiest thing you’ve ever done?

Moved to France for a year with a fairly rudimentary command of the language, during which I decided to quit my Ph.D. program and enter publishing. Best decision I ever made—not only is a bad day in publishing better than a good day in grad school, but drinking all that Bordeaux helped improve my tolerance in preparation for all the publishing lushes with whom I’m now friends.

3. I wonder if lushes make good minions too? When I’m not busy taking over the world, I like to eat pie. What kind of pie do you think is worthy of my Spork of Doom status?

A pie stuffed with the still-beating hearts of your enemies and glazed with their tears? Wombats prefer cupcakes.

4. Your pie has found favor with me, minion! What’s your favorite thing to do with a spork?

5. KFC is all part of my Master Plan. I have the ability to be simultaneously spoon, fork, and weapon of mass destruction. What unique ability do you have?

My editorial changes are made of kitten whiskers and moondust. I can convey bad news so gently that you’re not even sure it was bad. I am also conversant in any reality TV program ever made (except the surgery ones, because those gross me out).

6. I don't watch reality tv, I create reality tv. Or I would, if anyone was smart enough to document my campaign for world domination with a video camera. In this day and age, a savvy spork bent on world domination can’t afford to ignore a good marketing campaign. I’m thinking t-shirts with “Spork or Die.” If you made a shirt with your own slogan on it, what would it say?

Wombatten down the Hatches! OK, that’s terrible. The wombat will have to find a writer to do some work for hire.

7. Since I'm still enjoying a slice of enemy pie, I forgive you the sorry slogan. If I had to compare myself to anyone in history, I’d have to say I’m most like Napoleon. Only skinnier. And shinier. And smart enough not to lose my empire at a place with a ridiculous name like Waterloo. Who are you most like and why?

I would like to claim I’m like Hatshepsut, the Egyptian queen who became a pharaoh by cunning and sheer strength of will, and who declared herself male (and wore a beard) in order to hold the throne. Because she is awesome, and I am also awesome! But I spend less time in drag. And honestly, I don’t have her follow-through. But people are free to build me a temple anyway.

8. Right after they finish building a temple to ME. Why is your job just as much fun as world domination?

Because it’s domination of the mind! OK, maybe I’m getting a little drunk with power, but my job has the perfect combo of creation and collaboration, and also means that when I find a story that I love, I get to share it with thousands of people!

9. Domination of the mind? Hm. A strategy I never considered. *take another bite of pie* In between conquests, I like to read a good story. What can you recommend and why?

I can recommend so many good stories! For you, I suggest RAZIEL, a paranormal romance about a fallen angel tasked with ferrying the souls of the dead—until he meets Allie, who’s supposed to go gently into that good night but just…won’t. It is Sporkworthy because, just as you are spoon & fork in one, Raziel is both angel and demon (well, vampire)…and of course, you’re both irresistible to all.

10. I am, aren't I? You need to accomplish a secret, night-time mission as my minion. Cloak? No cloak? Why?

Definitely no cloak, for I am a student of esteemed superhero designer Edna Mode. Also, wombats are short of leg and stumpy of build, so cloaks are…not so flattering. We are already excellent at blending in, burrowing and otherwise proceeding by stealth. The cloak would just be ostentatious.

11. I also find no need to hide my awesomeness behind a billowing sheet of fabric. Let the world be blinded by the glare of my titanium sporkiness and tremble! My best piece of advice to others is this: “Fear the spork!” What’s your best advice?


Thank you so  much for such a fun interview, Abby! To learn more about Raziel and the author Kristina Douglas, head to her site. You can follow Abby on twitter as @AbZurdity. And now, for the giveaway! One lucky reader will win a copy of Raziel. Here's how to enter:

The contest is open until 8 p.m. (central time) Thursday, January 27th. Please check back to see if you've won and to claim your prize!

Good luck to all, and happy reading!
﻿

Email ThisBlogThis!Share to TwitterShare to FacebookShare to Pinterest
Labels: interview