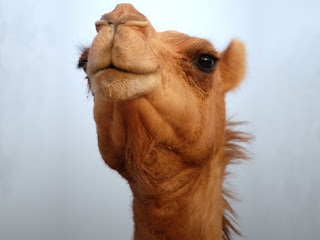 The Creation Museum in Kentucky has a petting zoo stocked with the usual suspects and a few exotic ones as well. There was a tremendously fat hog, a pen FULL of goats (Which, even though they're small, are sneaky animals who'll head-butt you or eat your pants off the second you turn your back.), a donkey, a baby zebra (who was friendly up until the moment he realized I had no food and then he lost interest), two llamas (Watch out! They spit! From both ends! Ack!), and one seriously stuck-up camel.

I've never had an up close and personal encounter with a camel. I don't think I want to ever again. I've decided the camel rivals the goat for Freaky Semi-Trustworthy Animal status.

This camel was, in short, a Diva. With large, flapping lips. She stalked around her pen, moving too fast for comfort, whipped her head toward me so we were looking eye to eye, and crowded her Wow I'm Big body next to mine against the fence.

Now, I should tell you the staff there have the good sense to keep everyone on the outside of the camel's pen (and the llamas, for that matter). I'm grateful. I've never heard of any incidents of Death By Camel, but having tried to pet one, I'm sure they exist. The camels just haven't left any witnesses.

This camel was all attitude. She swept up to the fence, dipped her head to stare at me, flapped her lips and made me wonder if camels are indeed vegetarians and if the shirt I was wearing made me look edible, and then whipped around to stalk the pen again. My dad wanted a picture of me next to the camel. The camel didn't think anyone should be in the picture with her. I tended to side with the camel.

I realize people ride these things. I'm sure someone, somewhere, has a one-humped, loose-lipped Diva named Fluffy as a pet. I, however, am adding camels to my list of Animals I Refuse To Tether In My Yard and moving on.
- October 22, 2008