What Happens When Pumpkins Drink? 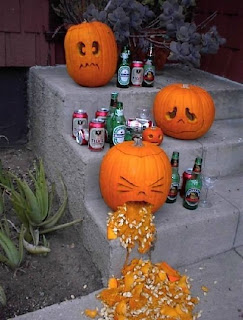 1. It's official. Johnny Depp signed on for Pirates Four and the story is completely about Captain Jack Sparrow.

2. Yes, that noise you hear is me doing my Happy Dance.

3. Midnight showing? Dressed as a pirate? You betcha.

5. You'll recall the 9-4 recently misbehaved and spilled an entire tank of gas all over the highway before costing us a pretty penny to fix.

6. Not to be outdone, the Explorer (otherwise known at The Piece...long story. Hilarious. I'll have to post about it.) just broke down and we received the unhappy news that it will cost over $700 to fix.

7. Since I don't know where that money will come from and I absolutely have to have a car next week to start my new job, I'm advocating taking it out back, shooting it, and putting in an insurance claim for a new one.

8. Anyone own a bazooka?

9. Starshine wandered up to me on Saturday and announced that, just for the day, he was going to be an eyeball.

10. I no longer question these sorts of proclamations. I just roll with it.

11. I did, however, advocate that he avoid all pointy objects.

12. My schedule for the foreseeable future is a mess.

13. It will be a glorious opportunity for me to forgo sleep (like I don't do that already) and demonstrate that when I say a writer needs to make time to write, I mean it.

14. Speaking of which, good progress on the rewrite/scene additions to Shadowing Fate. If the world would leave me alone for three days straight, I'd be finished.

15. Since that's about as likely as Jerry Springer winning a Nobel Peace prize, I'll have to fit it in around out of town company, running kids in three different directions, job training, a jaunt to Kentucky, and whatever else gets thrown into the mix.

16. I've decided if I'm ever as rich as J.K. Rowling (Hold your laughter, dang it! It could happen!), I'm going to pay off the mortgages of all of my friends.

17. We have birds nesting in the ventilation shaft of our downstairs bathroom.

19. Few things are as disturbing as entering a restroom, becoming indisposed, and then hearing two birds do their best to kill each other right above you.

21. I added a Hangman Game to the bottom of this blog in case you're at work and would rather do something...educational instead. =D

22. Reader Question: You're making me a mix tape (okay, okay...a mix cd) and want to introduce me to three bands/artists you love but are pretty sure I've never heard of. Which three do you include?
- October 13, 2008