Letterman, Eat Your Heart Out 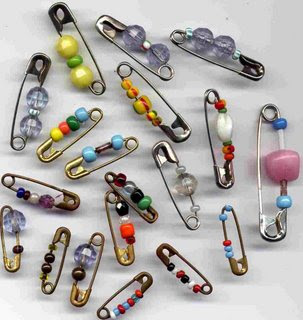 1. Random google-age (which means my Swiss cheese of a memory can't recall how I arrived here) found this photo of the now-defunct friendship pins which my friends and I used to make and then wear pinned to the shoe-laces of our tennies.

2. Took two teenage girls to the mall for a makeover and then to see Confessions of a Shopaholic which, even though it took liberties with the book, was charming and funny.

3. Discouraged kittens from leaping into the dishwasher as I tried to load in dirty plates.

4. Also discouraged kittens from leaping into the dryer as I loaded in wet clothing.

5. Failed on both accounts.

6. Explained reality to the co-worker who was absolutely certain Congress was divying up $800 billion between all taxpayers.

7. Had an agent I really like ask for my phone number after reading SF so we could talk. :) I'm not a huge exclamation point kind of girl but this statement is momentus so please insert as many exclamation points as you feel a career-shaping moment deserves.

9. Am really loving my new van (even though it doesn't have the 9-4's devious ways) but feel that it truly needs a nickname to be one of the family.

10. Waited on a party of seven, five of which were guzzlers. (You know who you are. Gulping your drinks down before I'm three steps away from the table and then repeating the process fifteen times before your food arrives.) Did a moderate amount of running back and forth for them. Was friendly. Funny. Pretty perfect service. They got up to leave and the man said "Wish I could leave a tip for you, but the economy, you know? I'm sure you understand."

You won't be surprised to learn that while he neglected to leave a tip for me, I had quite the tip for him. He might repeat his act of disrespectful arrogance again, but it certainly won't be in my restaurant.
- February 24, 2009