Friend, amazing writer, and fellow Pixie is celebrating the release of her debut novel today. Kris Kennedy won the historical fiction category in last year's Golden Heart and her novel, The Conqueror, has been steadily garnering a solid collection of stellar reviews. If you love medieval historical fiction where the author sinks her teeth into the history as well as the characters, you'll want to snatch up The Conqueror and give yourself a treat! 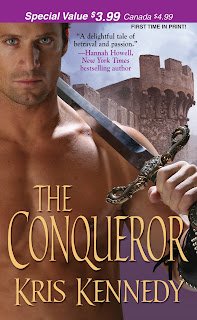 After seventeen years of a civil war, things are about to change.

Reluctant hero Griffyn ‘Pagan’ Sauvage is single-minded in pursuit of his mission: overthrow England. He has vowed to reclaim his beloved home, lost seventeen years ago in a coup of the English crown, and wreak his vengeance upon the man who stole it, John de l’Ami. He disavows anything related to a destiny, as he has rejected everything connected to his brutal father.

He veers from his quest only once, to rescue a brave and beautiful woman from a midnight abduction.

Guinevere de l’Ami, countess of Everoot since her father died two weeks ago, is equally committed to only one thing: redemption.

Then one fateful night changes everything. A midnight rescue on the king’s highway results in a single night of unforgettable passion, making them risk everything for the despair-defying connection neither ever hoped to find.

Their explosive reunion, a year later, follows betrayal and a bloody invasion. Now cold vows of revenge, the lure of buried treasure, and a deadly enemy closing in threaten a love that could unite a realm, or bring it crashing to the ground.