I Succumbed to The Crazy 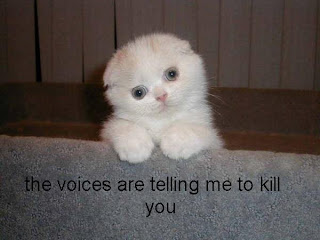 6. It's my first time braving the crowds on Black Friday because crowds generally make me behave in ways that could get me arrested.

7. (Case in point: the time I rammed another shopper's cart out of the middle of the aisle during back to school shopping.)

8. (The other "case in point" I can't tell you about because the police still don't have any suspects and why put myself on the radar if I don't have to?)

9. I got to the store at 4:40 a.m. (it opened at 5) and discovered the line was already wrapped around the building.

11. I also got what I came for by making up for lost time--I refused a cart and instead employed the old bob, weave, and ram technique to reach my quarry before it was sold out.

12. Now I'm home and my right eye has developed a twitch.

13. I just read an article discussing the recent death of UGA's bulldog mascot and PETA's public suggestion that UGA should forgo purchasing another bulldog for the school and sink their money into an animatronic dog instead.

14. I frankly don't care one way or the other what UGA does and I bet PETA doesn't either.

16. Because the logic used in the PETA statement is ludicrous.

... acquiring a dog from a breeder perpetuates the animal overpopulation crisis while causing another dog waiting in an animal shelter to be condemned to death.

18. I'm trying to understand their reasoning.

19. They're saying that by purchasing a bulldog from a breeder, UGA is condemning a dog in a shelter to death.

21. The only way that logic holds together at all is if UGA's alternative would be to rescue a bulldog from a shelter instead of buying one from a breeder.

23. PETA wants them to use an animatronic dog instead.

24. Which doesn't do one thing to save dogs in animal shelters.

25. I think the only thing PETA wanted out of this was a headline.

26. As a fierce animal lover myself, I get disgusted by PETA's frequent headcase reasoning and blatant bids for publicity that do nothing to actually find needy animals a good home.