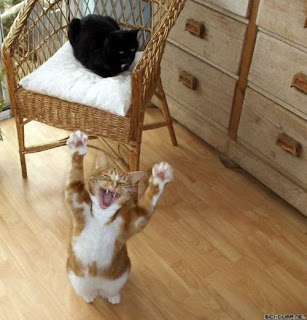 1. First, let me just get the whole Wally the Were-Platypus thing out of the way.

2. Yes, I made cupcakes today.

3. Yes, I have Were-Platypus supplies at the ready.

4. No, it wasn't easy to find Were-Platypus supplies at ANY of the stores in my town.

6. At some point tomorrow, in between work and my hubby's attendance at the local city council meeting, we'll be putting together a Were-Platypus cupcake.

7. Shannon has already made and posted hers.

8. Kerry has been conspicuously silent in the face of my blatant challenge.

9. But I think I dragged Shannon's friend Frankie into the fray.

11. Today, as we drove home from church, the Scientist began discussing the band Nirvana which lead to him giving us a startlingly accurate dictionary definition for the word "nirvana" which lead to him explaining it was generally a term one associated with the Buddha.

12. We asked him if he even knew what the Buddha was.

13. Before he could answer, Daredevil piped up and said, with a heavy dose of I-can't-believe-I-have-to-explain-this-to-you-people, "I know what a Buddha is. It's the part of your body, just above the back of your legs, that you sit on."

14. And he slapped his Buddha, just to make his point.

15. Also, Daredevil snuck a can of silly string onto the school bus this week and coated everyone in a five foot radius around him.

16. Is it any wonder we're on the principal's speed dial?

17. A few days ago, Starshine took a shower.

18. Yes, that statement deserves it's own numeral. As does the fact that this time he used soap.

19. Because we reminded him, but whatever.

20. When he exited the shower, my hubby, Daredevil, and I were all sitting on my bed talking.

21. Starshine ran up to us, his towel flapping around his shoulders like some terry cloth cape, threw his arms above his head, thrust his business in our general direction, and shouted "Holla!"

22. That's "holler" pronounced "haul-ah" for those of you lacking in street cred.

23. I tried really, really hard to convince him that he must NEVER do that on the school bus, in the classroom, or while we wait in line at the grocery store.

24. But, like I said, the principal has us on speed dial.