Lumberjacks of the World, Unite! 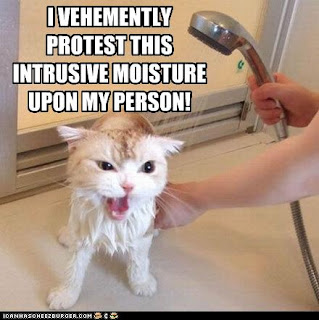 1. The above picture represents all you need to know about my efforts to force my boys into some paltry semblance of personal hygiene.

2. Last week, my grandma, who lives in California, suddenly got very ill and needed emergency surgery. The doctors felt she was likely to have a heart attack during the procedure or just not wake up at all, so early Wednesday morning, I raced to the airport and made my flight to California with six minutes to spare.

3. Which meant I had the joy of sitting in a middle seat.

4. Which wouldn't have been so bad if the man to my right had possessed even a rudimentary understanding of things like bathing, deodorant, and not stretching one's arms above one's head when one's underarms could conceivably be used as a biological weapon of mass destruction.

5. At any rate, my grandma is a trooper and came through the surgery. Her recovery is up and down at the moment, so how she eventually fares remains to be seen, but I'm glad I went to see her.

6. Especially because the combination of slight dementia and narcotic pain killers made my always sassy grandma often hilariously funny.

7. Like the time my sister was talking to her about having chronic bronchitis and Grandma stared at her in shock and yelled, "You have hepatitis?!"

8. Or the time she heard me discussing teaching online workshops, clutched her stomach, and said "Oh, the thought of teaching classes online just gave me a stomach ache!"

9. But especially the time her day nurse (Who alternated between ignoring Grandma's needs or treating her like she was three), leaned over her, noticed her dry cracked lips the day after the surgery, and said "What happened to your lips?" Grandma looked her dead in the eye and snapped back "What do you think?"

10. Spend five minutes with her and so much about me is explained.

11. When I returned home, my kids were excited to see me and gave me a present. An action figure of Toothless the dragon. I'm thrilled!

12. Starshine explained to me that while Toothless is a fantastic dragon, he wouldn't be Starshine's first choice. Why? Because Starshine would like to invent a dragon that can shoot a fireball from either end. Like a llama's spart, only with flames.

13. The strategic advantages would, of course, be priceless.

14. *sigh* And yes, in this house, everything eventually comes down to a fascination with bodily functions.

15. Starshine also informed me recently that we shouldn't vote for someone who wanted to get rid of ALL taxes.

16. I agreed and said we needed taxes for things like roads, military, and emergency services.

17. He shook his head and responded, "If the government didn't collect any taxes, in a few years we'd run out of trees."

18. When I questioned this logic, he said, "Mom. The government has to be careful of the trees. Without taxes, lumberjacks will take over the world."