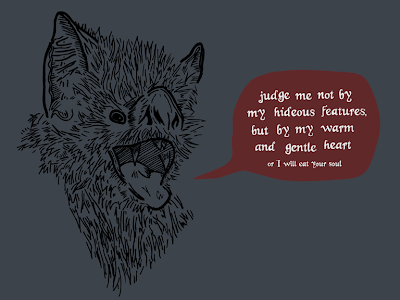 This pic is a t-shirt recently offered on woot.com, and I laughed myself stupid when Clint shared it with me.

What I'm listening to right now: Almost Lover by A Fine Frenzy

1. The more exposure I have to the general public, the more I subscribe to the belief that certain gene pools could use a bit more chlorine.

2. Yesterday, Clint, Starshine and I went to the Renaissance Festival. As we were walking past a large corral where little lords and ladies could take a ride on a camel for the bargain price of $5, a teenage girl behind me said to her boyfriend, "Oh, those poor camels! They must be so hot out in the sun! I bet they wish they could just stay in the shade."

4. Is it possible we have a generation of kids who have no clue about a camel's natural habitat? I mean, Tennessee gets hot, yes, but we've got nothing on the desert.

5. On a side note, I could smell that camel looooooong before I saw him. I wonder if the camel has any natural predators? If so, I bet copious lack of personal hygiene is a pretty strong defense.

6. While at the Festival, I wandered into a tent with gorgeous artwork. Dragons, castles, mythical creatures...right up my alley. The artist was one of the four who was commissioned by the Tolkien family to do artwork on LOTR. He drew (among other things) the Eye of Sauron. I found a fascinating gargoyle pic I simply had to own. Ten seconds of staring at it and I had the beginnings of a really cool story in my head.

7. The artist autographed the pic for me. As we chatted, I confessed I'd always wished I could draw but just didn't have the talent. He looked like I'd just told him I had four days to live. I saw the moment he was going to give me the "Everyone can be taught to draw passably well" speech I've heard so many times before. I hastened to assure him that a) I really had all the drawing talent of a piece of gravel and b) this didn't bother me because I more than made up for it with story telling ability.

8. He was somewhat mollified, but I think he still felt I probably had latent, undiscovered artistic ability somewhere inside me. He needs to spend five minutes watching me try to do arts and crafts, and he'll be cured of that notion.

9. We spent Saturday at the local water park hanging in the wave pool, floating down the lazy river, and playing mini-golf.

10. Again, mass exposure to the general public did nothing to dissuage my growing belief that a Zombie Apocalypse might be a good thing.

11. Women: There comes a point in most of our lives when we must embrace the concept of a one piece bathing suit. Naturally, there are exceptions to this *coughAngelinaJoliecough*, but I didn't see a single exception this weekend. I saw a lot of HOLY COW PUT THAT AWAY BEFORE SOMEONE LOSES AN EYE, and I doubt any of those women wanted that kind of reaction when they crammed themselves into bikinis several sizes too small.

12. Men: You have a drawstring. This means you have OPTIONS. There's no need to wear your suit so low you walk around looking for all the world like a damp plumber. And GOD FORBID you squat down to pick up a child. No one came to see the Grand Canyon.

13. This weekend, I stopped Starshine as he was walking out the door with a handful of brightly colored items. On closer inspection, I realized he was an armload of my bras.

Me: What are you doing with my bras?

Starshine: These aren't bras. They're slingshots.

I vetoed the plan (and avoided any more pesky phone calls from my neighbors. "Did you know your son is spraying the driveway with black spray paint?" "Are you aware your boys are throwing the contents of their room out a hole in their window screen?" "YOUR BOYS ARE HAVING A PEEING CONTEST OFF YOUR BACK DECK DO SOMETHING NOW OH MY POOR EYES.") and sent him back upstairs to put my unmentionables back where they belonged, all the while refusing to consider how many times he may have raided my drawers without my knowledge.

Although, given some of the things I saw at the water park, he's not the only one who believes Victoria's Secret sells slingshots.

14. Tune in tomorrow when the Were-llama interviews the savvy and hilarious Barbara Poelle, lit agent with the Irene Goodman Agency. She's giving away books!
- June 01, 2010