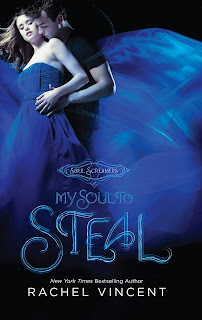 I've been a fan of Rachel's writing since I picked up STRAY, the first in her adult were-cat series. I was immediately immersed in the culture of the werecats, identified with the characters, and couldn't put the book down because I had to KNOW what happened next. When Rachel started writing YA as well, I couldn't wait to try her series. It has everything I love about Rachel's writing; vivid world-building, action-packed suspense, and fiesty characters I want to know (or want to kill ... all depending).  Here's a peek at her recent YA release, MY SOUL TO STEAL.

YOU WANT MY SOUL AND MY BOYFRIEND?

Trying to work things out with Nash—her maybe boyfriend—is hard enough for Kaylee Cavanaugh. She can’t just pretend nothing happened. But “complicated” doesn’t even begin to describe their relationship when his ex-girlfriend transfers to their school, determined to take Nash back.

See, Sabine isn’t just an ordinary girl. She’s a mara, the living personification of a nightmare. She can read people’s fears—and craft them into nightmares while her victims sleep. Feeding from human fear is how she survives.

And Sabine isn’t above scaring Kaylee and the entire school to death to get whatever—and whoever—she wants.

I DON'T THINK SO.

When I asked Rachel to be interviewed on the blog, she chose the Spork of Doom. I believe the Spork may have finally met his match!


Before we get to today's interview, it's time to reveal the amazing cupcake my hubby made for Rachel. (He would like Rachel to know he had to look up the word variegated before he could completely understand what kind of leaves she was talking about and that because of her extensive vocabulary, he spent much of his time cursing all writers in general.) Because one of the characters in MY SOUL TO STEAL feeds on people's fear and crafts nightmares for a living, my hubby decided to make a nightmare cupcake (complete with the curse-worthy variegated vines Rachel mentioned played a big role in the book). Without further ado, I give you the nightmare cupcake and Rachel vs. the Spork of Doom.


1. I’m all about world domination, and I’m always looking for good help. Why would you be an acceptable minion in my quest?

2. *gives you doomy glare of DOOM* That's what they all say. At first. Being a Spork of Doom takes moxie. What’s the sporkiest thing you’ve ever done?

3. When I’m not busy taking over the world, I like to eat pie. What kind of pie do you think is worthy of my Spork of Doom status?

I make a mean homemade deep dish caramel apple pie. But I don’t think you could handle it. That’s a lot of pie.

4. You DARE to cast aspersions upon my pie-eating ability? Tread carefully, madam. The last fool who questioned me got a tine in the cornea and spent the rest of his days going by the unflattering moniker Spork-Eyed Wilbur. What’s your favorite thing to do with a spork?

Eat noodles. The fork wrangles the noodles, the spoon holds the broth. Perfection.

5. Perfection indeed. *preens* I have the ability to be simultaneously spoon, fork, and weapon of mass destruction. What unique ability do you have?

I have the ability to snap a spork with only my mind. Fear me.

6. Spork-Eyed Rachel. It has a ring to it, don't you think? In this day and age, a savvy spork bent on world domination can’t afford to ignore a good marketing campaign. I’m thinking t-shirts with “Spork or Die.” If you made a shirt with your own slogan on it, what would it say?

“Save a Spork; Eat a Shish Kabob”

7. If I had to compare myself to anyone in history, I’d have to say I’m most like Napoleon. Only skinnier. And shinier. And smart enough not to lose my empire at a place with a ridiculous name like Waterloo. Who are you most like and why?

Any hermit who fights her battles with a pen.

8. I don't need a pen. I have titanium tines. Why is your job just as much fun as world domination?

Because I get to create entire worlds, not just dominate them.

9. *reconsiders the merit of a pen* In between conquests, I like to read a good story. What can you recommend and why?

The Forrest of Hands and Teeth. The only thing missing from that one was a spork.

10. So many authors fail to realize the genius of including a spork in their magnum opus. You need to accomplish a secret, night-time mission as my minion. Cloak? No cloak? Why?

11. Never mind my earlier nickname for you. I've changed my mind. Keep up the sass and henceforth you shall be known only as Rachel the Sporked. My best piece of advice to others is this: “Fear the spork!” What’s your best advice?

If you’re facing down a hellion with nothing more than a spork…run.

*glares* Fine. Run. But leave the pie. The pie is MINE.


Thank you, Rachel, for such an entertaining interview! To learn more about Rachel, visit her site. To purchase MY SOUL TO STEAL (Remember, it's book 4 in the Soul Screamers series. Start with MY SOUL TO TAKE.) go here.

Of course, the fun isn't over yet! Rachel is giving away a signed copy of MY SOUL TO STEAL to one lucky commenter. The contest is open internationally. Here's how to enter:

The contest is open until 8 p.m. (central time) Sunday, April 3rd. Please check back to see if you've won and to claim your prize!