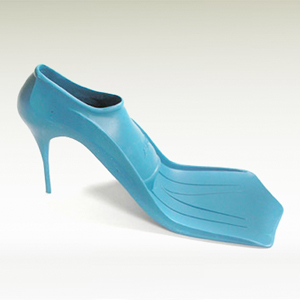 1. Sadly, the shoe pictured above? Totally real. For sale. Touted as one of the haute styles of the season.

2. Consider me out of fashion, then, because I wouldn't wear those things unless you paid me good money to do so. 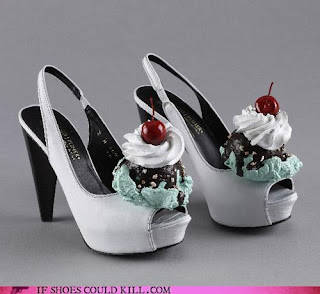 4. Okay, no. I wouldn't. But I would totally admire anyone who did.

6. The other night, Starshine and Princess J were playing in the living room.

8. Princess J was closing in when Starshine shouted, "Behold, my smoke screen!", turned his back, and farted.

9. Princess J was undeterred by either his smoke screen or his bodily functions, but he did manage to make me leave the room.

10. A few nights after that, Clint and I were sitting in the living room talking when Starshine ran by us screaming "I'm spawning! I'm spawning!"

12. I thought I had a decent transition from that story to this, but alas, it fell apart on me.

14. No, he hasn't been making friends with Beth Revis. He learned his lesson by watching me.

15. Is he playing in traffic? Consorting with unsavory types at odd hours of the night? Eating the cafeteria's mystery meat?

17. The other day, I'd had 3 hours of sleep the night before and that always makes me feel sluggish and kind of sick. I happened to mention to Clint that I kept feeling overheated and ugh.

18. And my loving, intelligent hubby looked across at me and said these fateful words:

20. My voice sounded sort of like a bullmoose on crack as I bellowed "WHAT?!!?!"

21. He tried to make things better by saying "You know, because of your age. It's not a bad thing."

23. I think we all know I have a rather sensitive gag reflex. There was the time I gagged because the eye doctor rolled my eyelid up with a stick. And the well-known fact that if I smell the nastiness that is green beans, I gag on that as well.

24. I can't tell you how many times my co-workers have shoved green beans in my direction so they could have their first laugh of the day. (Green beans are one of my restaurant's specialties)

25. And while I can handle stories of blood, guts, and gore with aplomb, I do not deal well with stories that involve creepy crawlies going into one's mouth.

27. So when a co-worker told me a story the other day about eating termites, I gagged.

29. I mean, I get it if you're Survivorman and that's your only option. But he lives in Nashville. Where there are grocery stores. With sources of protein that don't include bugs.

30. He told me it was because his father-in-law didn't think he'd do it, so he ate them to spite him.

31. I asked the next obvious question: Are you sure YOU eating TERMITES actually caused your father-in-law the sort of grief you hoped to accomplish?

32. Because it seems to me the person eating the bugs got the short end of the stick no matter which way you look at it.

34. Butterflies are moths. They ARE. They might be beautiful and colorful, but they have the same grotesque elongated bug body and fluttering wings.

35. So the other day when I was sitting in one of the manager's offices making a phone call, and she plucked a beautiful butterfly magnet from her stash of "Things To Torture C.J."  and put it right in front of my nose, I nearly screamed.

36. It wasn't a magnet that looked like an artist's interpretation of a butterfly.

37. It was a magnet that looked like a real butterfly somehow got a magnet stuck to its belly.

38. I shot across the room and waved my manager away from me. In silence, of course, because I was on the phone.

41. When she realized I truly did not find joy in the freaky little thing, she put it away.

46. Tune in on Wednesday to learn about some exciting changes to the author interviews! And keep a weather eye on the blog this week because, believe it or not, I nearly died. Again. Because of my nose.
- April 11, 2011