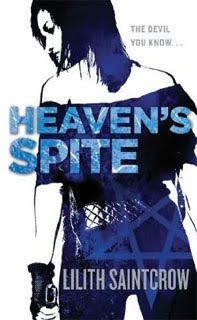 It's no secret that I adore both the YA and adult books of the talented Lilith Saintcrow. And I'm not alone in this ... her earlier interview consistently ranks among my top ten viewed blog posts. Lilith's books are full of spine-tingling action, edge-of-your-seat suspense, and raw emotion. Her newest book in the Jill Kismet series continues the thrill ride as Jill keeps her enemies closer than her friends in an attempt to defeat the latest awful creature crawling out of the pits of hell to torment the inhabitants of Earth. Here's a peek at the story:

When a new hellbreed comes calling, playing nice isn’t an option. Jill Kismet has no choice but to seek treacherous allies – Perry, the devil she knows, and Melisande Belisa, the cunning Sorrows temptress whose true loyalties are unknown.

Kismet knows Perry and Belisa are likely playing for the same thing–her soul. It’s just too bad, because she expects to beat them at their own game. Except their game is vengeance.


Nobody plays vengeance like Kismet. But if the revenge she seeks damns her, her enemies might get her soul after all…

Don't expect to get much sleep while you're reading it! I was thrilled when Lilith agreed to be interviewed again on the blog. (And wait until you see the HOLY COW AMAZING giveaway she's offering!) This time, she chose to take on that bastion of awesomeness, the Were-llama.


Now that you know who's who, let's dive into the interview and reveal the cupcake my hubby made in honor of HEAVEN'S SPITE. In the novel, there are pale oval doors between our world and hell, and misshapen appendages try to pull their way through those openings. My hubby decided to make a cupcake depicting one of those fruitless bids for freedom. Without further ado, I give you Lilith vs. the Were-llama and the cupcake doorway to Hell.


In addition to being a writer, I am a mother. Which means I can command obedience with a single scorching look, an aggrieved sigh, or a single word. The power of my Mommy Voice can stun an entire class of seventh-graders into silence, halt a teenage boy in his tracks, and turn adults into children caught at the cookie jar in an instant.

I do try to only use my powers for good.

2. I was impressed right up until that last sentence. Only use powers for good? Pfft! Where's the fun in that? I like to spit at my enemies from whichever end is closest to them. Do any of your characters have cool abilities like that?

Not quite that…theatrical. One of my characters can bring the dead back to answer probate questions. Another can set things on fire with her mind. Yet another can get shot with an assault rifle and get up ready to kick serious ass. They’re a mixed bunch. But no, not as…cool…as your abilities.

3. I see what you're trying to do with that deliberate little hesitation before the word "cool." You deal with a face-full of llama spit (from either end!) and then we'll talk about who's COOL. If I had a nickname, it would be The Awesome. You?

“Tiger Lili.” It’s what my bouldering partner calls me at the climbing wall. Probably because I enthusiastically throw myself at the wall like a maniac, and claw my way up through sheer force of will.

4. I don't claw my way up anything by sheer force of will. I make humans do that for me. I hang around this blog because I love stories. What’s your story about? Bonus points if it includes a llama.

My story’s about a woman who wakes up in her own grave out in the desert, covered in wasps and amnesiac. As usual, she’s got to save the world, but that’s tough to do if you can’t even remember your own name. Things just get worse from there. I am greatly saddened to report that I was not talented enough to put a llama in.

5. *sighs* So few truly understand the literary genius of adding a llama to the story. You’re making me a cake worthy of my awesome Were-llama status and decorating it to represent your story. What does it look like?

Burned, blood-spattered, scattered with silver charms and spent ammo casings, drenched with rainwater, sliced by hellbreed claws. Rendered in exquisite confectionary detail, and, of course, delicious. (After all, CJ’s husband is drafted to make it. Right?)

6. Your offering has been deemed acceptable. And yes, C.J.'s long-suffering husband makes all confectionery carnage in this household. Any Were-llamas in your book?

I wish! Alas, my literary talents are not considerable enough for the challenge of portraying the nuance, the grandeur, the sheer scope of the Were-llama. My lack of ability fills me with despair.

7. *pats you on the head* The accurate portrayal of the majestic Were-llama and his formidable spitting abilities is more than most authors dare attempt. We are, however, notoriously sneaky and might have slipped in under your radar. Anyone who might be a Were-llama and you just haven’t figured it out yet?

I can’t think of a single character worthy of that high status. Although there probably are a tribe of Were-llamas in Jill Kismet’s world.

8. If there are an entire tribe, rest assured, Madam, that they shall soon rule that world. With a business end at BOTH ends, no one escapes the wrath of the Were-llama. Llamas or camels and why? Think carefully.

Llamas, of course! They are ideal for home defense. I once (and this is 100% absolutely completely true, before you ask) knew a Reiki master who had a herd of sheep; he had a llama to guard them. He said the llama scared the coyotes so bad they never came back. I believe this.

9. There was a brief, tragic time in our history in which we were used as spitting guard dogs for the benefit of humans. But we've since handed that role over to donkeys (They have a high kick to rival that of any Vegas showgirl.) and are intent on ruling the humans instead. I give you a baby Were-llama as a companion. What do you name her?

10. A wise answer. My favorite word is “awesome” because, yanno, look at me. What’s yours?

I can’t choose! Words are a neverending smorgasbord of delight, a banquet of sensual joy. I love them all. Each word is exquisite. I can’t pick a favourite, though I do sometimes whip out “antidisestablishmentarianism” to trip the unwary.

11. I sometimes whip my hair back and forth to trip the unwary, but whatever works for you. As a young Were-llama, I dreamt of taking over the eastern seaboard one face full of spit at a time. What did you dream of doing when you were young?

I’m afraid my dreams most often centred on simple survival. Where I grew up, dreaming was dangerous. One had to be alert at all times, and dreaming was a liability.

12. No wonder you have an innate appreciate for the ferocity of the Were-llama. I'm glad to see your dreams now give us doorways to hell and women bent on revenge. Now, all you need to do is add a llama to your next story, and you'll be the complete package. Cake or cookies?
Yes, thank you.

With my writing partner or my teenage daughter, yes. Because they know where I sleep. Anyone else, it depends on the time of month—and their methods of begging or persuasion.

14. I refuse to beg or persuade, but I have no doubt you would share with ME. The Zombie Goat invasion is upon us. How will you fight them off?

Firepower. Sledgehammers. Katanas. Kerosene. High-heeled shoes. Sippy cups. Bendy straws. Toothpicks. Grand pianos. Wet noodles. In short, anything I can get my hands, feet, teeth, elbows, knees, or nose on. In the face of a Zombie Goat invasion, everything is a weapon. Everything.


Silly girl. All you need is a tribe of Were-llamas.

Thank you, Lilith, for once again delivering a fabulously entertaining interview! To learn more about Lilith and her awesome books, visit her site. To purchase HEAVEN'S SPITE, head here.  But of course, the fun isn't over yet!

How HOLY COW AMAZING is that??

And that's not all! Next Monday, you'll get a chance to read Lilith's Top Five list and be entered into a drawing for a one-of-a-kind necklace designed especially for HEAVEN'S SPITE. Trust me, this necklace is awesome!

What are you waiting for? Fill out the entry form, vote in the poll (located on my sidebar), and check back Monday to see who won and to enter the drawing for the one-of-a-kind Jill Kismet necklace!