Top Five Methods To Determine If You Are A Zombie

The zombie apocalypse has struck, but you're prepared. You've done your cardio, you know about the double-tap, and you're cautious in bathrooms. You know not to be a hero until the last quarter of the movie, especially if your partner is Woody Harrelson. But something doesn't seem quite right. You can't quite put your finger on it.


You want to know if you're at risk. Fear not, doughty warrior facing the hordes of undead. Here are five simple methods of determining whether you're a zombie, or at risk of becoming one.

5. Check your appetite! Do spongy, soft, wrinkled, warm human brains sound really good, instead of as disgusting as a politician's sex life? Extra points if you don't even want ketchup/mustard/salt with your hot, steaming, messy brain breakfast. If that didn't make you want to blow chunks, you might be a zombie.

4. Try to run, hop, skip, or dance. If you can only shuffle-shamble (Dawn of the Dead) or scuttle (Night of the Living Dead remake) or move freaky-fast (28 Days Later), you're probably a zombie.


3. Look at your leisure activities. Do you sit for hours chained in a shed, playing video games and making long gassy noises? Or do you crouch behind Dumpsters waiting for unwary heroes to race past? If you do, you, my friend, are probably a zombie. On the other hand, if you are practicing flinging LPs like shuriken or learning to shoot a gun in a cool montage, you're safe. For now.


2. Sniff your pits! If you smell like gun oil, BO, or Cheetos, you're OK. If you reek of rotting flesh (and have not shot a zombie in the head recently and been spattered with stinking goo) or if the tip of your nose falls off while you sniff, you're probably a zombie.


1. Most importantly, think about your Horror Movie Karma. If you:

*have stolen something from a protagonist,


*have threatened an innocent bystander,


*have not been allowed any speaking lines,


*are wearing a red shirt,


*are hearing swelling sad music or eerie drumbeats in the background,


*have fallen in like with the Silent Grim Hero or the Spunky But Helpless Heroine,


*had sex (if female) or fallen in unrequited love (if male),


*have had to run away from Kevin Bacon in creepymode,


*have realized you are a token minority in a group,


*have recently said "I don't see anything," or "What could go wrong? or "Where are you?" or "Nothing's going to happen!" or "I'd rather die than be one of those things," or any variation of the previous,


*have forgotten to turn your cell phone off,


*have ever forgotten to lock a door/window/aperture during the course of events,


*have found out you are spunkier/sassier/sexier than a protagonist with more lines than you,


*have realized you are Sean Bean or Lance Henriksen or any other actor/actress who they have to kill so you don't steal the movie,


*have noticed that everything around you is dead quiet except for your own panicked gasping breathing...


...well, my friend, sucks to be you, you will soon be a zombie. Don't worry, though--the hero/ine will soon bash your head in or ignite you, and your agony will be brief.


I hope these simple guidelines help. Stay safe (and zombie-free) out there!

*is busy sniffing her pits and nearly misses her cue* Awesome list, Lilith. I'm nearly convinced I'm not a zombie, but I worry a bit about my neighbors ...

If you missed out on Lilith's amazing book giveaway last week, fear not! (Unless you've determined from this list that someone you love is a zombie. If that's the case, FEAR. And then RUN. And also, act as brainless as possible. I've heard that helps.) My favorite jewelry designer on Etsy, Tashina Falene (check out her shop!), has designed a one-of-a-kind necklace just for Lilith's character Jill Kismet, and I'm offering it to one lucky reader! 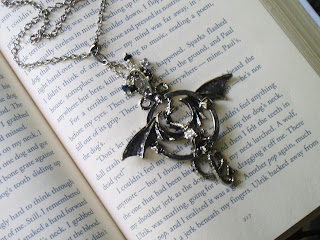 Isn't it amazing? It was designed with suggestions from Lilith and is the only one that will ever be made. To win it, simply fill out the form below. There are many ways to earn extra entries, and the contest is open internationally. You have until 8 p.m. Central Time on Friday, June 17th to enter. Make sure you scroll down to answer every question on the form and hit Submit so your entry counts! :)


Thanks again to Lilith for being an amazing author and giving us such a plethora of spine-tingling, heart-grabbing, edge-of-your-seat stories. If you haven't read her yet, I hope you'll pick up one of her books the next time you're looking for a fabulous read.

Check back Friday night for the winner announcement, and good luck to all!
- June 13, 2011