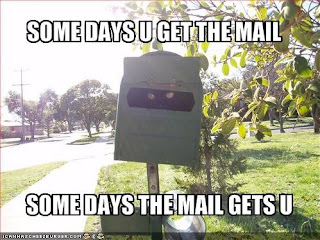 List of Things I Would NOT Do If I Could Restart Yesterday:

1. I would NOT have driven the 9-4 out to Daredevil's school to pick him up for his doctor's appointment.

2. Because then I would NOT have gently driven over the speed bump in the school parking lot (which may or may NOT be the culprit but nothing else comes to mind) which, unbeknownst to me, knocked either a hose loose or a hole in the gas tank, even though I never scraped bottom.

3. Also, I would NOT have blithely assumed the stench of gasoline in the air around the 9-4 belonged to another car.

4. When the 9-4 refused to start on my first attempt to leave the school parking lot, I would NOT have given it another go.

5. When pulling out of the parking space, I would NOT have neglected to peruse the pavement for the GIGANTIC puddle of gasoline lying there, plain as day.

6. Which means I would NOT have attempted to drive thirty-two miles to Nashville to drop Daredevil off with my hubby.

7. Also, I would NOT have simply opened the windows to air out the overwhelming scent of gasoline while we were driving when pulling over would have been a much better option.

8. Which brings me to the fact that I would NOT have suddenly clued in to the fact that something of a flammable nature was wrong with the 9-4 while I was surrounded by semi trucks and idiot drivers who couldn't care less that the van in front of them was leaking like sieve.

9. Which means I would NOT have spent the last few minutes of the drive frantically calling my hubby to ask what was wrong with the van while remaining hyper-alert to any sign of smoke from either my hood or my exhaust pipe.

10. All of which means I would NOT have run out of gas while on a dangerous curve of a busy freeway with no real shoulder and absolutely no place to stand safely.

11. Which means, of course, that I would NOT have been inspired to communicate LOUDLY and with GREAT FERVOR with my Lord and Savior Jesus Christ to PLEASE DON'T LET ME DRIFT TO A STOP WHERE THERE'S NOWHERE TO GET DAREDEVIL TO SAFETY!

12. Which means I would NOT have had my prayer answered and coasted to a stop where the road again gained a shoulder and a patch of grass to send my son to safety while I wrestled with his backpack, my purse, and my ipod. (Some things are worth risking life and limb.)

13. I would definitely NOT have engaged my author's imagination as I peered under the car and saw the last of the 15 gallons of gas I'd had at the start of the trip pour out.

14. Which means I would NOT have wondered if the van would explode the second I turned my back, giving me a dramatic exit from this life but possibly taking Daredevil with me, an option I found unacceptable.

15. I would NOT have had to call my hubby to come get us and then watch cop cars and motorists alike whiz by a woman and her small son without stopping to see if I'd punched a hole in my gas tank or worse, broken the heels on my stilettos while running up the embankment from the potentially explosive 9-4.

16. I would NOT have had to thank the very nice man who did stop and offer to stay with us until my hubby arrived.

17. I would NOT have had the pleasure of seeing Daredevil recover from his fear that the van would explode (No, I didn't share that idea. He thinks like me.) and realize, to his intense enjoyment, that pulling his fist up and down would cause EVERY SINGLE TRUCKER ON THE INTERSTATE to honk their horn while passing us by.

18. I would NOT have missed a meeting at work due to lack of transportation.

19. I would NOT have had to drive Daredevil back to school, hubby to the house, and then return to the scene of the crime with Paul so I could take advantage of the free towing on his AAA card.

20. Which means I would NOT have had to use up a chunk of my friend's time sitting there waiting for the tow truck.

21. Which, of course, means we would NOT have made plans to create the kind of scene worthy of 6 pm news coverage (I can't divulge our plans but we were going to use his police baton, gun, and my considerable acting skills to great advantage).

22. I would NOT have had to walk into our mechanic's office, inform them of the 9-4's impending arrival, and watch them laugh hysterically because simply entering my name in their computer brings up a list of the 9-4's crimes designed to make every other vehicle look like a saint.

23. I would NOT have foolishly told the mechanic to just take the 9-4 out back and shoot it if it turns out the hole is in the gas tank instead of the hose without first making plans to steal the Ferrari I so richly deserve.

25. And, I would NOT have been forced to stop for groceries at the silly hour of 5:00 p.m. because I would already have restocked the essentials: Milk, fruit, lunch materials, and a t-shirt that says "Arsonist Wanted: Experience With Vehicular Fires A Plus".

26. Which means that I would NOT have walked in the door just in time to have the Scientist inform me that if I left RIGHT AWAY, I could make it to his open house in time.

27. So, of course, that means that I would NOT have had to drive back out to the school, over that accursed speed bump, spend an hour and a half hearing how wonderful my son is, only to return to the parking lot and find that the GINORMOUS gasoline puddle I left earlier in the day is STILL THERE.