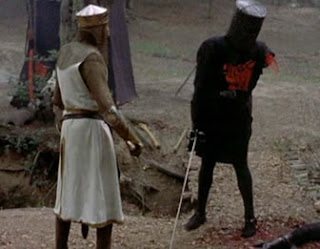 1. A BIG thank you to nomadicdragon (who beat Peter von Brown to the punch by mere minutes) for recommending the Finding Neverland soundtrack.

2. I'm listening to it as I type this, and I'm completely in love with this music.

3. I'll get to the other recommendations soon.

4. Hubby is making a cake this weekend for someone who loves the movie Airplane.

5. He's mimicking the pic of the airplane tied in a knot at the middle.

6. I'll try to get a pic of it to post here for you. Should be amazing.

7. I'm going to resume Writing Process posts soon so hit me in the comments trail with questions/suggestions for what you'd like covered.

8. I think I have four new scenes to add to SF and then it's done.

10. The guy who sexually harassed me at work is now long gone.

11. I realize that sentence is open to many interpretations.

12. I really can't explain more without incurring the wrath of my lawyers.

14. One has to wonder what terrible famine induced some poor unfortunate individual to look around at what was left to eat, see that the pig apparently didn't truly need his lower appendages, and dunk them in a spicy brine to make them nearly edible.

15. I mean, I know it's good to use as much of the animal as possible but still, there are certain parts no one was ever meant to eat.

16. I forgot to mention that Paul and I got into a huge food fight at work the other night.

18. Naturally, I ended it. A handful of soggy tea grinds to the face will do that.

19. I've heard a delicious little rumor that Johnny Depp might play the Riddler in Batman 3.

20. Yes, I know this is just speculation but still, the very thought has me salivating, ready to shell out money NOW for midnight passes.

21. READER QUESTION: Who would you love to see play one of the villains in the next Batman movie?
- September 12, 2008