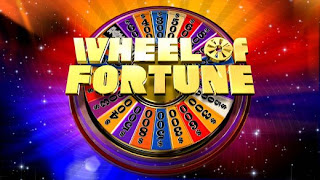 Not long ago, I promised to tell you the story of my failed attempt at securing a spot as a contestant on The Wheel of Fortune. I grew up without a television for most of my childhood, but my grandparents owned one, and as they lived five blocks away, I was often at their home for dinner.

My status as cherished granddaughter did not, however, give me control of the remote. Dinner time meant one thing in my grandparents' house. Wheel of Fortune followed by Jeopardy!, that nefarious concoction of Merv Griffin's designed to make its audience feel either astronomically foolish (I'm supposed to know which general died first in the second skirmish preceding the War of 1812?!) or incredibly irritated with the oh-so-pompous Alec Trebec.

I much preferred Wheel of Fortune.

I was good at Wheel of Fortune.

WoF is all about words. The ability to spell. The instinct to know which letters are the most probable combinations. The skill to take pieces of a phrase and quickly fill in the gaps.

I gave everyone a run for their money.

So, when I went to college at Pepperdine University in Malibu, Ca, a short drive from the Burbank studios housing most of prime time's shows, it was only natural that I come across a flier soliciting college students to audition for WoF.

I was excited. I soooo had this in the bag. Nothing but words, letters, and the ability to seem outgoing and fun. I was ready.

The day of the auditions, I arrived at the studios and stood in a ridiculously long line. Apparently, many other college students felt the same kinship with vocabulary and money as I did. I had to fill out paperwork with my name, next of kin, and the reasons I would be an asset to their show.

I was perplexed about the whole next of kin thing. Was I in danger? Did the wheel have a history of flying off its axis and beheading hapless contestants? Did Vanna bite?

Some would-be contestants were disqualified at this point. I'm not sure what official reason the producers gave but a quick survey of the DQs revealed them to be the sort who lived in a cave and rarely, if ever, participated in basic human rituals like conversation and personal hygiene.

The next phase of the audition was a simulated WoF game. The producers crammed fifty of us into a room, set up a faux wheel against a wall, and drew a blank puzzle on a whiteboard. Then the fun began. One producer was in charge of choosing contestants. She told us she was looking for fun, camera-friendly folks who would engage the viewers at home with their wheel-spinning style.

Randomly calling on would-be contestants, she worked her way across the room. Most people fizzled under the pressure, choosing one letter (and NOT one of the standard R,S,T,L,N,E that everyone knows you're supposed to choose first) and then freezing when it came to making their next decision. A few got through two.

Then, she called on me. I leaped to my feet, allowed my sparkling personality to do the engage-viewers work for me, and made it through four letters before I chose a dud. I was elated. I'd shown up the rest of the room, in both letter selection and basic fun factor. The producer double-checked my name before letting me sit down. The other producers were smiling at me.

The producers culled the group of fifty to a measly twenty-five and herded us into the final stage. The written test stage. The stage where all my hopes and dreams came crashing to the ground.

WoF involves choosing letters, watching them fill up a phrase, choosing more based on the letters already there, buying an occasional vowel if necessary, and getting the phrase to the point where intelligent guesses are possible.

This test had puzzles with nothing but a few letters in place and the category listed beneath it. There were no opportunities for additional letters. No opportunities to buy a vowel. It was, in short, a nightmare.

And we were timed. There were twenty of these tiny torture devices. I raced through them, solved three. Raced through again. Slowed down. Studied them. Willed myself to think. Realized that if my brain hadn't already provided a suitable answer, none would be forthcoming.

I glared at the producers for giving me something that was clearly not WoF. In the real Wof, I would be able to buy a vowel. Ask for more consonants. Get some freakin' help with filling in the blanks.

Alas, I solved only three. Others, I'm sure, solved more. They must have. Ten of us were moved to the spin-the-actual-wheel round of the auditions. I was not one of the ten.

And there ended my dreams of being a game show contestant.

Btw, the puzzles I listed above are the only two I remember from the actual audition sheet. I didn't get either one but they gave us the answers afterwards. Bonus points for you if you can solve them. :)
- October 15, 2008