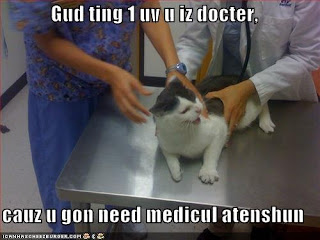 1. When I informed my children that I'd finished Shadowing Fate, Daredevil jumped up and down and said "WoooHooo! We're rich!"

2. Ah, to be that young and naive again.

3. Last night, I hosted a candle party. I'd booked the party through a consultant I'd never met face to face.

4. The party was fun, the consultant was great, and then as we were sitting around my table chatting while my friends ate pie and browsed catalogs, I glanced at the the label on my own catalog--the one listing the consultant's full name--and realized why her name looked so familiar.

5. I'd borrowed it (without remembering where I'd seen it) for one of the victims in Shadowing Fate.

6. I started laughing and told her, "I'm so sorry! There's a corpse with your last name in my latest novel."

7. She thought it was pretty cool.

8. So much for thinking I'd pulled that particular name out of thin air.

9. The moral of this tale, of course, is that if I know you, I might kill you at some point.

11. I think I'll be mentally prepared to dive into Twisting Fate on Monday.

12. Of course, first I need to research hypochondriacs, anti-social disorder, gene-splicing, and how to break out of maximum security prison.

15. My hubby's birthday is coming up the day after Thanksgiving.

16. I don't even think he wants a cake, but it's a tradition my boys won't allow us to skip.

17. He gets two round cakes stacked on top of each other with store bought icing and sprinkles. (The boys are in charge of the sprinkles. This explains why last year you could barely taste the cake past the stale-sugar crunch of Christmas themed--hey, I don't censor their sprinkle choices!--sprinkles.)

21. Yes, this shows a distinct lack of planning on our part.