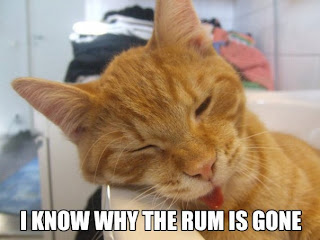 Last night I had one of my Really Fun episodes of insomnia. By the time hubby's alarm rang at 3:30 a.m., I still hadn't slept a wink. I informed him of the problem as he was getting up. Something in my tone (I get ATTITUDE after I've been awake most of the night) had him reaching for solutions.

Yes, this is the same man who suggested I drive with my left foot. But, I digress.

First he commiserated. That was nice. But unless his commiseration was going to be followed by a magical "go to sleep" knock on the head, it didn't do me very much good. Next, he suggested just taking 1/2 of a Tylenol pm. I vetoed this idea because we all know I can't tolerate pain pills and I needed to be awake at 6:30 to get the kids ready for school. Three hours is not enough time for my body to burn off even 1/2 a Tylenol PM.

So, scraping the bottom of the barrel when it comes to plausible methods to fight insomnia, he suggested I take a swallowful of rum. You'll all recall my incredible intolerance for alchohol. One mouthful of margarita makes me sleepy for an hour. I decided his idea had merit.

He brought me a small cup with one fairly large swallow of rum inside it. Now, I should pause the story at this point to tell you that while we have rum and Everclear in the house, both are used for cooking. The Everclear, you may recall, facilitates the spray on food coloring used to decorate hubby's cakes, and the rum is used for his incredible Bananas Foster (yes, he lights it on fire to the delight of our children who love to add bananas to the list of things they might someday light on fire when their mother isn't looking).

We don't actually drink the rum. Ever. This was a maiden voyage in the whole rum-tasting experience. While I hoped my inner pirate would come roaring out, I felt it much more likely my jaw would clench, my throat refuse to swallow, and then I would end up expelling rum through my nostrils. My hubby sniffed the cup and told me just to toss it back, avoiding my taste buds at all costs.

Another idea that had merit.

I tossed the rum back, swallowed as soon as it hit my throat, and promptly gagged. It was like swigging some dollar store cologne or maybe chugging straight from a bottle of Lysol. I can't believe anyone drinks this by choice. It burned all the way down my esophagus and I imagined the offended tissues forming committees, electing representatives, and drafting strongly worded memos along the lines of "Do this again and we shall kill you 'til you die from it."

My hubby, of course, thought the whole thing was hilarious. This is because he wasn't the one swallowing rum without benefit of sugar, bananas, and butter. That can be rememdied, however. He's a very hard sleeper.

He left for work and I settled back against the pillows, fully expecting to feel the post-alcohol wave of sleepiness hit me at any second.

The one time in my life where my intolerance to alcohol was a welcome occurance and it failed to materialize. I finally fell asleep twenty minutes before I had to get up and get the kids off to school.

Turns out when Elizabeth told Captain Jack rum was a vile drink, she was telling the truth.
- December 10, 2008