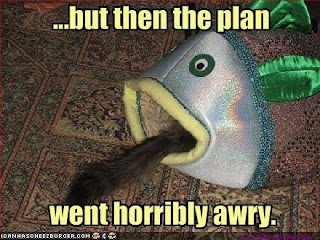 1. That new McDonald's fillet-o-fish commercial is a menace.

2. At first, I mocked it. I mean, come on, a singing bass serenading two guys in an attempt to reclaim his already cooked buddy?

3. I said things like "What did that ad team smoke for breakfast when they came up with this winner?" and other equally unflattering observations.

4. It wasn't until last night that I realized the true genius of the ad.

6. Gimme back that fillet-o-fish! Gimme that fish!

8. In other news, I finished revising the ending for SF, added two chapters and wrote an epilogue.

9. My CPs liked it, there were no glaring instances of absolute idiocy, so I sent it off to Holly.

10. Now I wait to see if it's submission-ready or needs another tweak.

11. In the mean time, I'm interviewing some people on the Crescent City area of California (thank you Jared for the hook up) and talking with Paul about the inner workings of a jail.

12. And I'm debating on names for my main antagonist in Twisting Fate. I've narrowed it down to Victor or Vincent, but am open to other suggestions.

13. Needs to have an edgy, convict vibe to it with an element of cool.

15. He then exited stage right.

16. I really should put him in children's theater.

17. By the way, I'm on facebook for any of you regular blog readers who haven't found me there yet.