Pick A Topic, Any Topic 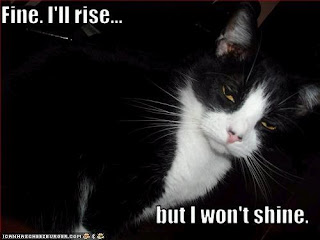 2. Before you think anything along the lines of "Ooh, how exciting!" or "C.J. must be thrilled," I'll tell you that this is the one instance in which shoe shopping is not cause for an endorphin rush.

4. My uniform requires clunky black athletic shoes with slip-resistant soles--exactly the kind of shoes I wouldn't be caught dead in outside of work.

5. My old ones, however, have been worn so long my feet feel like someone is pounding iron spikes into my heels when I walk.

6. Once a month (or so) I treat myself to a drink from Starbucks or one of the many Starbuck-look-alikes.

7. Yesterday, I tried something new. Something non-coffee.

8. This is because it was warm outside and the Starbucks in our town refuse to serve decaf frappuccinos.

9. The world is not yet ready for the experience of C.J. post-grande caffeine consumption.

10. Anyway, I tried some new drink (with a pretentious name like Verrano or something close to it) that was Mango Banana Orange.

11. I love mango, banana, and orange but somehow, combining those flavors in this drink ended up canceling them all out and leaving nothing but a vaguely fruity froth.

13. In other news, I got my contract (signed by both Holly and myself) in the mail the other day and she'd stuck a tiny yellow post-it to the paper that simply said "Yay!".

14. I'm going to keep that post-it as a reminder that someone in the know believes in me.

15. I read a book the other day that did many, many things right and only two things wrong.

16. The "wrongs," however, carried some weight.

17. For one, the author had a super scary villain, pretty much unstoppable, and he was seriously creeping me out as he stalked her heroine and then poof! He's found dead with a note from some other criminal saying he wanted to do the heroine a favor.

18. That fizzling sound you hear is all the suspense draining out of the last third of the novel.

19. Also, the fizzling sound you hear is my irritation at the author for choosing such a convenient way to get rid of her scary problem child.

20. The second thing the author did wrong was to write a who-done-it and reveal the murderer at the end as the person who initially found the body.

21. That in itself is hardly a writing crime. The problem is that we were in that character's point of view when she found the body and nothing about her internal thinking raised a single red flag.

22. This is astonishingly convenient for an author who wants to set the reader up with various red herrings to follow and then give us a big reveal at the end.

23. However, it just doesn't work. Even when I looked back and saw the one "out of place" phrase she used, it still doesn't work.

25. Because if I've murdered someone and then I've "stumbled" across the body, I'm not going to be thinking anything other than "That's right, you had it coming! You thought you were so special, but I showed you, didn't I? And now I'm going to put on the act of the century and get away with the whole thing!"

26. Finally, I've recently discovered that the secret frothy ingredient in an Orange Julius is egg white.