"Knowing" How To Do It Right 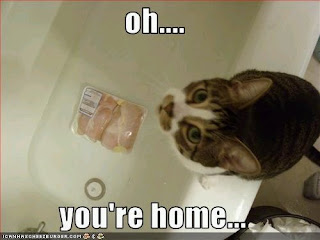 I didn't put this pic up because I think it's funny. I put it up because WHAT SANE PERSON DEFROSTS CHICKEN IN A BATHTUB? Blech.

I went to see Knowing last night with my hubby and Paul and most of it was really good. Suspense! (My hubby jumped at one point and now wants a t-shirt that says "I Had The Crap Scared Out Of Me By A Flaming Moose") Heart-rending moments! Interesting concept! (Albeit a tad predictable, since I called the ending twenty minutes before we got there.)

BUT ... there were three things that were just plain wrong and, as these are common mistakes writers make in books as well, I'm going to dissect them here. I'll try hard not to give any spoilers away, but it's a possibility so don't read any further if you want a totally unsullied movie-viewing experience:

* In Knowing, there are these seriously creepy albino-looking Whisper People that are stalking Nicholas Cage's kid. These Whisper People are so unbelievably freaky, they sort of melt out of the woods and once even walk right into the kid's bedroom at night when he's sleeping and wake him up with horrible consequences. These are not people you want anywhere near your kid and Nicholas's character has already had one run-in w/them, trying to chase them away, and he lost, to put it mildly. At one point in the movie, Nicholas Cage and the woman who is helping him (whose daughter is also being stalked by the Whisper People), drive w/their kids to a trailer in the middle of nowhere and then leave their sleeping children in the car while they investigate the inside of the trailer.

This is a serious breach in believable character motivation. I'm a parent. I can tell you with absolute certainty that if creepy Whisper People were after my kid, I wouldn't leave his side for one second until I was sure the danger was gone. This was a cheap ploy by the director to make sure the next piece of his movie could happen as he wanted it to happen. Authors do this too--sacrificing authentic character motivation for the sake of shoe-horning something into the plot. Don't do it. Readers always know the difference.

*In a later section of the movie (SPOILER ALERT HERE), the Whisper People steal both children from the woman, who then races after them in a car and is broadsided and killed. Nicholas Cage is a few minutes behind her, is informed by onlookers that freaky strangers stole the car with the children in it, and then comes upon the accident that killed the woman.

Authentic character motivation would have Nicholas do the following: Race to the ambulance to see if he can get information on the whereabouts/direction the Whisper People were heading with his kid, then peel out of there at 110 miles an hour trying to catch up to them and rescue the children.

What Nicholas Cage does: Approaches ambulance and stands quietly while the paramedics try to revive her. When she's pronounced dead and the medics leave the vehicle to try to help someone else, he enters the ambulance, sits by her side, brushes the hair from her face, and then discovers she's holding something in her hand that is key to the plot. THEN he leaves and races after his kid.

Again, this is a contrived scene guaranteed to give the director the easiest method of giving Nicholas certain information but it does not work. Why? Because all parents in the theater know that if Whisper People had their son, they wouldn't stop for anything, not for anything, to get to him in time.

*Finally, the ending left all of us completely non-plussed. I don't think I've ever had cause to accurately label my emotions with the word "non-plussed" until last night. I won't go into details, but all of us sat there in silence for a few moments, waiting through the credits to see if there was one last scene to fix things, but there wasn't.

Don't do this to your readers. Finish things in a way that leaves them satisfied. This is possible to do, even if you're writing a series and are setting up the next book. Leaving a reader non-plussed at the end of your novel is a great way to have your name crossed off the Authors I Must Read list.

I've gone into detail on the things that didn't work for me in this movie, but to give them credit, most of it worked. I was scared, I jumped once (though not because of a flaming moose), and I spent the entire freaky Whisper People In Kid's Bedroom scene hoping to one day write a scene as scary as that. I just feel that with a little more work, and less reliance on what was easy and convenient, this movie could have been amazing. It's a good lesson to writers to never take the easy road and to always do a check to make sure your character's actions are rooted in authentic motivation.
- March 23, 2009