Today, as promised, a post on zombies. Not just any zombies. Zombie goats. 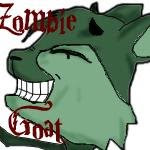 Unlike ordinary zombies who stalk through the streets muttering "Brains! Brains!" with the single goal of finding an unwary human and dining on the contents of their cranium, zombie goats are a much more insidious creature. As I've discovered an inexcusable lack of information on the Internet regarding this terrifying threat to our way of life, I will now take it upon myself to educate the public:

Ways in Which Zombie Goats Differ From Ordinary Zombies:

2. They do not have to die to be infected with the Zombiagulus Virus and indeed are often born with it.

3. They show no preference for brains so donning your protective Zombie Helmet does nothing to keep you safe.

4. They lure their victims with displays of cuteness.

5. They chew anything and everything, often starting with the outer limbs so as to render their victims incapable of flight.

6. They pretend to be foolishly stupid, lulling their victims into complacency before they strike.

7. They infiltrate even the most sacred of human-animal sanctuaries: The Petting Zoo. 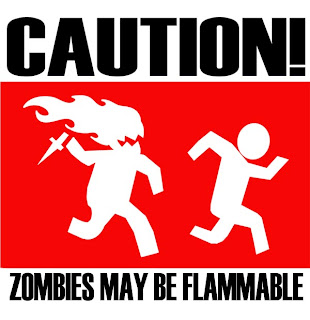 Ways To Repel the Zombie Goat:

1. Wear stripes, solid colors, or nothing at all. Whatever you do, DON'T WEAR PLAID. It aggravates the unnatural horizontal pupil of the Zombie Goat.

3. Avoid the hairstyle-that-wouldn't-die: The Mullet. Zombie Goats recognize those wearing a Mullet as natural prey. Something about Survival of the Fittest and Natural Selection.

1. The Zombie Goat has only one natural predator: 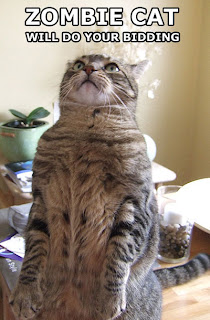 Don't have one of these? Get one. Fast. Don't wait for tragedy to strike. Act now. Zombie Cats available at local pet shelters in your area.