For The Love Of Biscuits 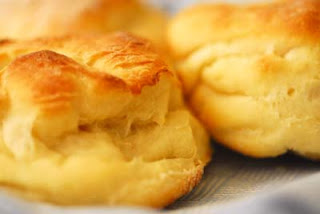 I see a lot of rather bad behavior from people in my line of work, but the one that gets to me the most is when someone thinks it's somehow appropriate to throw a tantrum over food. And by tantrum, I mean yelling, tossing their silverware down on the table, and going on and on about how their life is absolutely ruined because we ran out of meatloaf.

The other night, a man pitched a fit over biscuits. Biscuits. I'm used to grown-ups behaving like a spoiled two year old denied his favorite blankie at bedtime, but on this particular day, I just couldn't take it.

Setting the Scene: Last Friday, a mere five hours after I'd watched Carly die and only one hour after a tornado devastated our neighboring city--killing a mother and child and wiping out blocks of homes.

Me: *bringing their dinner to their table a scant six minutes after they'd placed their order--even for us, that's really fast.* Here you go. We've got fresh biscuits coming out of the oven in just a moment so I'll be right back out with your bread.

Man: *slaps his hand down on the table* Well that's just great. How long do I have to wait? Is my food going to get cold?

Me: Not if you start eating it now. By the time I walk back to the kitchen, the bread will be ready and I'll be right back out.

Man: *throws his spoon onto the table* You've just ruined my day. I can't believe this *^$#.

Me: *realizes that maybe he's just come from Murfreesboro and lost everything* I'm sorry. You've had a bad day? Did you get caught in that tornado?

Man: *looks at me like I have three heads* I wasn't having a bad day until you brought out food without the biscuits.

Me: *slowly realizes that yes indeed this man is having a fit over something as unimportant as bread* So, you're only upset because the bread is coming out two minutes after your dinner?

Man: Only?! I like my biscuits with my meal. I want them now! I don't want to wait for two minutes and you've ruined my dinner now.

Me: *feels thin grasp on temper snap with a resounding crack* Let me get this straight. The only thing that's gone wrong for you today is your biscuits arriving shortly after your plate of food? You haven't lost a loved one? Haven't watched anyone die? Haven't been told you have cancer? Haven't lost your job? Haven't had your entire home turned into kindling at the whim of Mother Nature? It seems to me that you've got nothing to complain about and getting angry over biscuits is insulting to everyone else who does.

And I slapped his plate of food in front of him, fetched his biscuits and slapped them down too, and then watched as he crumpled up a one dollar bill and threw it onto the table as he left. I don't think I got through to him, but maybe he'll think twice next time before deciding something an inconsequential as food is worth such poor behavior.
- April 15, 2009

Email ThisBlogThis!Share to TwitterShare to FacebookShare to Pinterest
Labels: rants