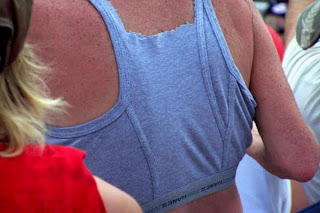 Take a close look. Note the extra seam where a seam shouldn't be unless you have family jewels to arrange.

There are so many things wrong with this, I hardly know where to start.

Second, the underwear in question has been clearly altered. On purpose. As in Not By Accident. Someone looked at them, thought to themselves "Hey! Without that pesky crotch in the way, these make a pretty fine tank top!", grabbed their scissors and hacked away.

And I do mean hacked. The cut is uneven, the edges are jagged, there's been no attempt to make the neckline look like anything other than a sabotaged crotch. Perhaps it's too much to expect a woman who chooses to wear men's underwear upside down and crotch-less to take a modicum of pride in her tailoring but ... still.

Third, were there no flannel shirts available? No hoodies? No t-shirts to cover this faux sports bra? I have to seriously question the mental health of any woman who runs out of shirts for the day and raids her man's closet ... for his underwear.

Unless, of course, this is the ultimate example of redneck recycling. Does your man keep wearing out the crotch in his tighty-whities? Are you tired of relegating scraps of cotton to the landfill but you know you don't need more dust rags? Don't toss it, wear it! Introducing the new way to Go Green!

Finally, I have to wonder about the view from the front. The posterior of a man's underwear was not built to lift and separate. Where's the support? The anti-jiggle underwire? Most importantly, the Avoid A Wardrobe Malfunction extra lining? Perhaps we should be grateful we're only getting a view from the back.
- May 27, 2009