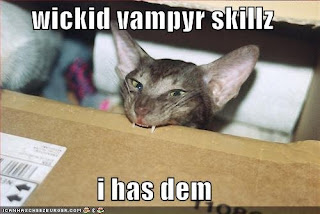 1. I've used the same three pair of black pants for my work uniform for four and a half years.

2. Three months ago, one of the pair came apart in the crotch.

3. Yes, I stopped wearing them.

4. Last month, another pair came apart in the crotch.

5. I stopped wearing them too.

6. Last night at work, I realized my last pair--yes, the pair I was currently wearing--were one shaky seam away from a spectacular public exposure arrest.

8. I have enough wardrobe malfunctions on my own without deliberately tempting fate.

9. Daredevil's 10th birthday was Tuesday. On Monday, I took him with me to spend some of his birthday money. We stopped for lunch at Olive Garden where he proudly told everyone he met that he was finally in double digits.

10. The older couple seated at the table next to us engaged Daredevil in conversation about his birthday and their own great-grandkids.

11. Several minute into the conversation, Daredevil looked at them and said, "You know what? I like talking to old people!"

13. On Tuesday, we honored Daredevil's birthday dinner request and entered the insanity that is Chuck E. Cheese.

14. At one point, Chuck E. himself came out to dance and sing the birthday song to a group of birthday kids.

15. For reasons that probably have a lot to do with Chuck E.'s rate of pay attracting only teenagers to the whole "get paid to masquerade as a giant mouse" gig, Chuck E. decided table dancing would be an excellent idea.

16. Chuck E. further compounded this grievous error in judgement by choosing as his platform a table that rocked ominously the moment he tried to mount its surface.

17. Chuck E.'s moment of glory was cut short by a combination of an unsteady surface, a fellow employee, and gravity.

18. We were at a side table, watching the action, and saying such enlightened things as "Chuck Down!" and "It's a Chucktastrophe!"

19. Thankfully, Chuck E. toppled backwards and therefore didn't flatten the group of toddlers in front of him.

20. The management is lucky every child in the building didn't see Chuck E.'s antics and decide that they, too, should dance on the table tops.
- July 24, 2009