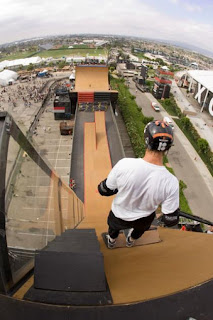 Last night, I curled up on the couch with my three boys and watched a brand new skateboarding event in the X Games. The event, called the Big Air Rail Jam, was the brain-child of skateboarding veteran Danny Way who was the oldest skater in the competition at 35 (Which by the way, sassy ESPN commentators, is not that old). The goal of the event was to start at the top of a ridiculously high ramp (see pic) and then launch into the air, do some sort of trick on top of a long rail, and land on the opposite ramp while still in one piece.

The kicker? The skaters couldn't see the rail until they were already flying off the first ramp. The event required faith in their skills and some serious courage.

Danny Way won the gold medal in the event, a feat made even more amazing by the fact that he was competing while on crutches.

He'd torn something in his knee and then seriously rolled his ankle on the same leg during a warm up trick yet he stood, balanced on his skateboard at the top of that long drop, confident and determined. He rode down the ramp innumerable times, missing the rail, landing in a heap, struggling to stand on one good leg only to hop to the side and rush toward the elevator that would carry him up to the top to try it all over again.

It didn't occur to him to quit. To bow out. To say, after four unsuccessful tries, that he just couldn't do it. Instead, he got back on his board, faced that long drop to the unknown, and went for it.

He landed one trick. One. But it was a thing of incredible beauty. That one trick gained a score high enough to give him the gold.

What if you balanced on the edge of your dream, unable to see the rail, but went for it anyway? What if you failed the first four (hundred) times you tried but you still ran back to the start and tried again? What if you ignored every excuse, every reason to quit, and refused to back down?

Email ThisBlogThis!Share to TwitterShare to FacebookShare to Pinterest
Labels: inspiration