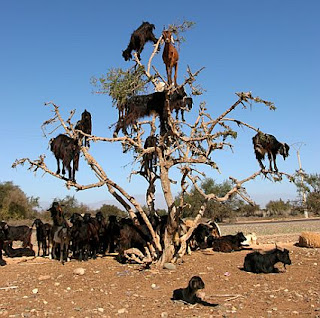 1. There is so much wrong with that picture.

2. Bad enough we have to defend ourselves against them on the ground.

3. Now they have the ability to drop out of the sky like horizontal-eyed goat bombs.

5. When we took the kids to see the sneak peek of A Christmas Carol, we were handed those blocky, black plastic Hey! I'm A Whiz At Calculus And Other Impractical Math Functions! 3-D glasses.

6. Daredevil put his on and they slid to the end of his nose.

7. Looking at me over the rims, he put his finger on the bridge of the glasses, slid them up his nose, and said "Get your nerd on."

8. I nearly peed my pants laughing.

9. I spent the weekend with some dear friends in the eastern Tennessee mountains.

10. They'd graciously offered me the use of their upstairs guest room to have a writing weekend.

12. We even took a quick trip to a tiny mountain town so I could really get the feel for it and I found Lilli's Mother's house, exactly as it's described in the book.

17. Here's a challenge for you. The following is a list of items I researched lately for Casting Stones. Two of them are false. Can you guess which two?

*The average running speed of a flock of chickens

*Cargo space in an Audi R8

*The location of the Colgate toothpaste factory

*What started the Chicago fire of 1871

*A recipe for buttermilk pancakes

Leave your answers in the comment section. All correct entries will go into a drawing and the winner will have a short piece of fiction written in their honor.
- November 16, 2009