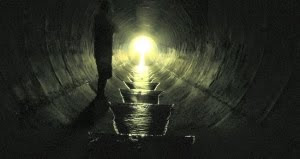 She's been threatening to hack into random.org and swing my contests in her favor for weeks now. I guess she finally accomplished the dreadful deed because M.G. Buehrlen is the Friday Fiction winner! M.G. please take a look at the list of titles to the right and let me know which one you want. :)

M.G.'s three words are: Fiesta (the Ford car version, not the party version)
Circumlocution, and Weenie-head.

She thinks she's done me in with those three. Never fear, faithful blog readers. I shall rise to the occasion. And then some.

I've waited here, in this damp, godforsaken husk of what was once a busy, well-lit hub, for more days than I can remember. The darkness swallowed me whole as I entered its lair, and my eyes had yet to adjust. For the first few hours, I'd strained against the thick blanket of black, hoping to see outlines of familiar shapes. Light gray among the opaque. Hints that I was somehow less alone.

I'd given up searching for anything days ago. There was nothing here. Nothing but cold slicing into me with bitter teeth, slow seeping damp coating the walls and huddling in the corners, and the whispery fear crawling along my skin.

He wasn't coming. He'd been infected. Or killed.

Either way, I was dead. Doomed to starve beneath the war-strewn streets above me, or fated to join the battle, be recognized at once, and find my head separated from my body before the sun could hide its face from the carnage we'd created.

In the heady days leading up to The Event, we'd thought we were heroes. Saviors. The gods of science all mankind would worship for centuries once we went public with our discovery. In all our circumlocution of logic, ideas, and outcomes, we'd been too busy gulping down the belief in our own greatness to ever stop and consider the consequences. The unknowns. The risks of removing all experimental controls and introducing the most unpredictable element of all--mankind.

There wasn't much mankind left to protest our hubris now.

And I was hiding beneath the streets, clutching the formula for what I hoped would be the antidote while Ben trolled the looted stores looking for ingredients. I'd wanted to come. Insisted on it. This was as much my mess as his. He'd refused me on the grounds that it wasn't just my life on the line now. I was hiding for two.

Hunger wrapped itself around my middle and squeezed with vicious fingers. The meager food I'd shoved into a plastic sack had run out hours--days?--ago. The water had run out soon after. If I didn't make a move soon, I'd die.

Trailing my fingers against the nubby, slime-covered wall beside me, I sidled along the walkway, caution raising the hairs on the back of my neck as faint screams filtered down from the street above. I slid one foot in front of the other without lifting my sole from the concrete beneath me. The last thing I needed was to hit an obstacle and plunge from the subway platform to the rails below.

The wall beside me gave way suddenly to the open space of the platform proper, and I nearly stumbled. Catching myself, I strained to see the steps leading from the underbelly of the city and froze as the distant whine of a motor hummed across the chilly air.

I whirled toward the tracks and crouched as headlights bounced around the corner, washing over the graffiti-coated walls in thin steams of yellow. Twisted letters in black and red bled across the unforgiving stone, a mural of images and words. The final obituary for a civilization brought to its knees in the name of progress.

I shoved myself back until I hit the wall, wrapped my arms around my chest, and watched as the headlights closed in until they slid over me and the vehicle screeched to a halt. It was a Ford Fiesta, battle-scarred and beautiful. As Ben opened the door and stepped toward me, I lunged for him, leaping off the platform to wrap myself around him.

"Hey, now," he said as I sobbed against his shoulder. "I'm here, now. It's okay. I told you I'd come for you. How's our little weenie-head?" He pressed a hand against my womb and the baby kicked.

"I thought you were dead!"

I heard something weary in his voice. Something that sounded like the awful, choking grief I'd held caged within me since the first moment I'd realized our beautiful gift to mankind was going to be its final curse.

"We need to keep moving. They're coming into the lower levels now," Ben said and gently pushed me toward the Fiesta.

I got into the car as somewhere above us gunfire ripped into the now-familiar cacophony of screams and curses. Soon, there would be no safety. No hiding place. No where to work to undo what we'd unleashed. We had to move fast before our chance for redemption was swallowed by the blood-thirsty tide above us.